In addition to being our last sea day, it was also Christmas eve. Having never spent Christmas on a ship, we weren’t sure what to expect, but MSC didn’t disappoint.

We spent most of the day bouncing back and forth between the various activities indoors, despite the excellent weather outside. We started the fun off with a Pictionary win, and followed that up by tying for the win in the first round of Christmas trivia! I said it yesterday, and I’ll say it again, the entertainment staff is outstanding. I really don’t know how Jaime is able to keep up with it all, but we’ve enjoyed every round of trivia we’ve participated in.

Lunch found us back at the buffet, which we’ve been somewhat disappointed in over the course of the week. Breakfast seems to offer the most stations open, along with the largest selection of items. When we’ve eaten lunch in here, half the stations are generally empty. It’s definitely a change from other lines we’ve been on. The other buffet related item that’s somewhat annoying is that they only have lemonade at the beverage stations during lunch. At dinner, it’s just water and tea. My irritation with the lack of buffet selection was tempered by our view of the ocean as we ate, though :).

After lunch and a bit of time resting, we headed back down to play Scattergories. Fun, but there were a large number of teams, which made it run a bit long, causing Jaime to be late to the final round of Christmas trivia. We all knew this because the guy I mentioned in my day 3 recap that promised to correct Jaime at every turn walked in loudly and rudely reminding Jaime that he was late. Seriously, you’re on a cruise, relax and enjoy yourself. We did head in to that final Christmas trivia round when Scattergories was done, but lost that one by 3 points.

After trivia, we headed to the theater for a special event. MSC had secured a visit from Santa and Rudolph, and had them set up on stage taking pictures and giving out presents to every single child on the ship. You read that right. Every last one who came in and waited in line got a gift. It wasn’t just small MSC logo items either. The presents were things like small Lego sets for boys, art kits for girls, and a couple of other types of presents I never got a good look at. We were in there the entire time, and that line was really, really long at the start, snaking from the stage up to the back of the theater, and back around again. It took just over an hour, but they got through everyone and still had a pretty good pile of presents left. I have to say, we were very impressed, MSC obviously knows how to do Christmas at sea the right way! 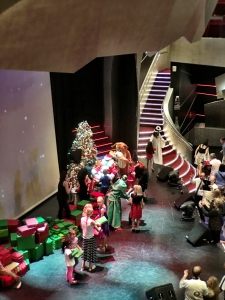 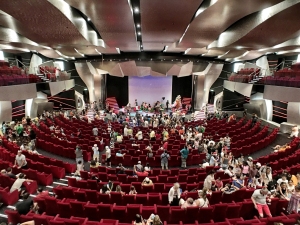 That took us in to dinner in the MDR, where we had a special 7 course Christmas eve meal. Things started off really slowly, as we only had the initial course before the first hour elapsed. They appeared to take notice of that, as things started coming out a lot faster, and all of the tables around us ended up losing out on one course, the pallet-cleansing sorbet set to arrive right before our entrees. While it would have been nice to have things a little more relaxed and in the proper order, we wanted to make it to the final bingo at 7:45, so we weren’t complaining. My dinner:

All of it was pretty good, although the carpaccio was a little drier than it generally should be. 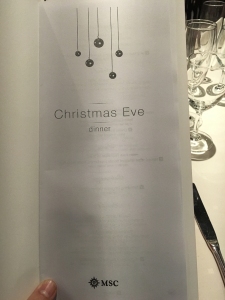 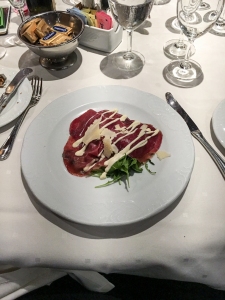 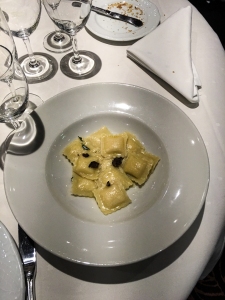 We made it to bingo on time, and enjoyed one last performance by the Bingo Boys. Seriously, this is the best entertainment staff we’ve had on any cruise we’ve been on. If you’re sailing the Divina any time soon, don’t miss bingo, even if you don’t play. 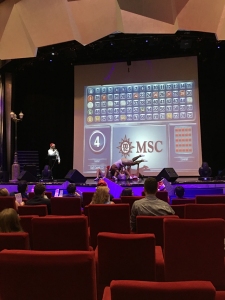 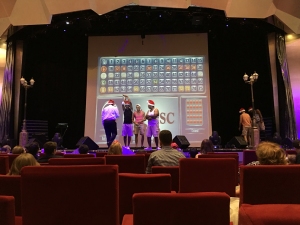 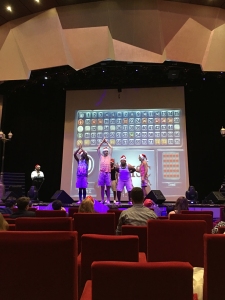 Since we’d been in the theater for bingo, we already had great seats for the show, and the special Christmas performance didn’t disappoint. It was a mix of singing, dancing, and some acrobatics. Great stuff!

We capped off our night by blowing some time (and a small amount of money) in the casino while waiting for the midnight buffet. I have to say, I love that the casino is smoke free.

It’s been a while since we’ve been on a line that still did a midnight buffet, and frankly I just assumed no one did it anymore. MSC proved me wrong, and in a big way. Every single station was open, with a mix of finger foods, bread, and a ton of yummy desserts. They also had a few carved watermelons, and different bread sculptures. We could see that a lot of time and effort went in to this, and were glad we stayed up for it. I swear there was more food in the midnight buffet than they actually have out on the lunch or dinner buffets. It was great stuff and worth the wait!

That about covers day 6. Our final day here on the Divina will be in port in Nassau for Christmas day. We were here last month on the Escape as well, and we’re really hoping that we don’t get all the rain we did on that last visit!