Before we get to day 5’s fun, I wanted to take a second to call out one of the highlights of our trip: The entertainment staff. The Divina’s entertainment team has easily been the best all around group we’ve had on a ship. From the Bingo Boys, to trivia, Scattergories, Foosball, arts and crafts, etc, the sea days have been an absolute blast. This group has a level of energy and enthusiasm I envy, and they’ve really been fun to watch.

Alrighty, on to day 5

We arrived in Old San Juan pretty early as far as I could tell, with debark scheduled to start at 8. The daily schedule indicated the gangway might be closed from 8:15 to 9:00 due to dock activity, so we set our alarms for 8:30, hoping to avoid the same debark lines we saw in St Thomas. I had actually been up since 7:30 and had never heard an announcement that we could get off, so shortly after 9 we decided to head down and see what was going on. Not sure if we’d missed the announcement, but the gangway was open with no lines, so we headed ashore.

Being that we waited way too long to plan this and all the stuff we wanted to do was full, we decided to just walk around. As we exited the security area, a tour guide approached asking if we wanted to join a 1+ hour tour of the area. For $15/pp, we figured why not, and hopped on. There were around 25 people including us on the bus, and it ended up being a pretty good tour. He took us over to the newer San Juan area, stopping at the Walkway of Presidents along the way to allow people to take some pictures. We stopped at a beach in the newer area of San Juan, along with one of the main government buildings, and then finally a 10 minute stop at one of the island’s forts that overlooks a cemetery. Along the way, he did a very thorough job of telling us about the area, and did so in both English and Spanish to ensure everyone on board had the chance to learn. Definitely worth the $45 for the three of us in our opinion. 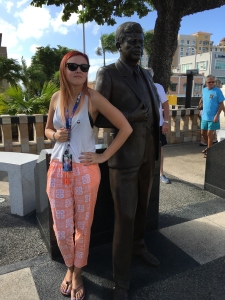 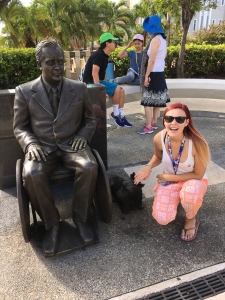 He dropped us back in the main square in Old San Juan around 11am, and after walking around the little square area for a bit, we decided to stop and eat lunch at CB Cafe and Restaurant at the top of the square. While it was a little pricey, it was really good. My cheese tortellini was excellent, and frankly the sauce on all three of our meals was really, really good. In addition to my tortellini, I’ve included a shot of Jen’s chicken Mofongo, as it definitely won for best presentation. 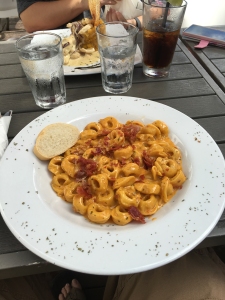 We spent the next 2-3 hours walking around the area doing some shopping. Considering there were 3 ships in port (us, the Carnival Valor, and the HAL Nieuw Amsterdam), it never felt overcrowded in the shopping areas. The girls picked up a few things along the way, and once done, we headed back to the ship. 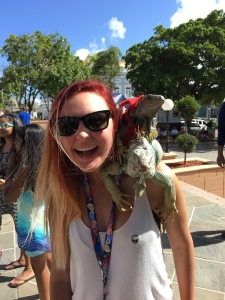 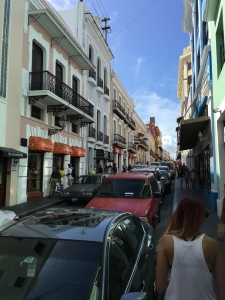 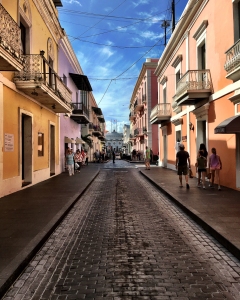 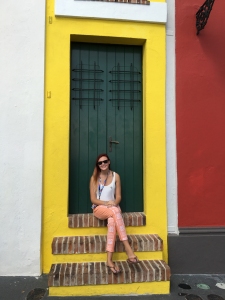 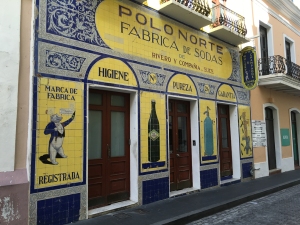 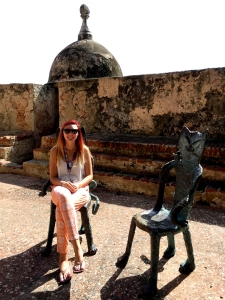 One thing about getting off and on in port we’ve noticed with MSC: There’s nothing at the end of the gangway, just the pier. On other lines, you’ll typically see photographers trying to take more pictures to sell you as you get off, and when you come back, others may offer water, juice, and maybe even a cold, wet towel to help you cool down. None of that here. I don’t care about the pictures, but it would certainly be nice to at least have some water there, especially after a hot day walking around the area. I admit we considered walking over to HAL’s gangway for a cold towel 🙂

Once aboard, we decided to give the water slide a try, since it was supposed to be open from 2-5. As we were walking up (somewhere around 3pm), one of the pool staff was walking away from the entrance, having just locked it. Some kid standing there said we had a wait a little longer, but after 10 minutes of seeing no one come back to re-open it, we gave up. We got tired of watching the Valor’s water slide fully functioning while the guy running ours inexplicably stood a deck up doing seemingly nothing. When you only have a three hour window for something like this, I really expect you to be open when you say you’ll be open, especially in port when the weather is perfect.

Next up was trivia, once again hosted by Jaime. We paired up with a really nice older couple from Canada that we’ve played with before, and lost by only one point. I gotta say, this trivia has set the bar for future trips, it’s really that good! Difficult, non-repetitive questions, and a great host!

At this point it was right around 4pm, so we headed up to deck 15 to see if there were any runners. Sure enough, a passenger was standing at the end of the gangway on her cellphone, and a short time later (maybe 4:10), her husband came running down the dock. That was a long run, too, as they had already closed the closer gangway, so he basically had to run the length of the dock.

After they closed up the gangway, we headed back to the wine bar where the girls made Christmas wreaths as part of another holiday themed arts and crafts event. The MSC staff has done a really good job of integrating holiday activities in to the schedule this week!

We’d checked out the MDR menu, and between the lack of things that sounded good and our overall exhaustion, we decided to skip it and eat later in the sports bar. After a snack (pizza :)) and a short rest, we headed to the theater for the early show. Tonight’s show was another one of the singing and dancing shows, and again, they’re all great singers, it’s just not my cup of tea. One little soapbox moment, though: If you’re going to come to the show, be quiet. Keep your kids quiet. Two rows behind us, some woman and her kids would not stop talking. They got plenty of angry looks and people telling them to shush, but to no avail. If you or your kids can’t keep quiet for 45 minutes, please do the rest of the people in the theater a favor and don’t show up. You’re just ruining it for those around you.

After the show, we stuck around for bingo, as the Bingo Boys are just that entertaining. Seriously. Even if you don’t like bingo, just go and watch, you won’t be disappointed!

With bingo over, we headed for the sports bar to grab dinner. The room was pretty empty the entire time we were there, since second dinner seating and the second show were both happening. The food itself was fine, but a couple of notes here: apparently all burgers automatically get mayonnaise. That’s fine by me, and I enjoyed my bacon burger, but even the pre-made burgers at the buffet have this, which we discovered on day 1. Not everyone likes mayo, so maybe just leave it off and put some on the side? Also, they have fish and chips on the menu in the sports bar, but when Jen asked if they had malt vinegar, she was told no. We know they do somewhere, since she had it on one of the early sea days, but oh well, she skipped the fish and chips this time. It’s pretty standard bar fare; burgers, sandwiches, fries, finger food, etc. The dessert menu also includes molten chocolate cake, as shown below. 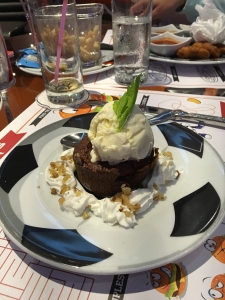 After dinner, we walked around a bit, finally ending up at the Flower Glory Party (60’s/70’s/80’s) before calling it a night. We got our hour back tonight, so hopefully we’ll be all rested up for our final day at sea, where we’ve got a bunch of activities highlighted on the schedule!

One final note – cabin service has really been hit or miss. Mostly hit for Bayley in her cabin (12039) and miss for us (9164). One example: we woke up this morning to find that our steward didn’t empty the trash in the bathroom or leave any toilet paper yesterday, so we’re down to our last few sheets. Time to go rectify that…