Today was all about getting off the boat and having some fun in St Thomas. After two days at sea, we were ready for a change. We booked an excursion on our own for this stop, one that Jen and I did last month on the Escape, the BOSS Underwater Excursion. We had a blast last time, and couldn’t wait to do it again, this time with Bayley. Note that normally they require cruise ship passengers to book through the line they’re coming in on, but MSC doesn’t contract with this company, so we were free to book it on our own.

Being that we arrived in port after their first trip of the day left, we booked the noon trip. Arriving in St Thomas at 9am, that gave us a couple of hours to walk around the port area. After doing a bit of shopping, we decided to grab some lunch at Shipwreck Tavern, just outside the port area, and we were glad we did. Everyone was extremely friendly, and the food was pretty good. The girls had burgers, and I had a Philly cheesesteak to go along with my rum punch. Definitely a good stop, we’d eat there again.

Just before noon, we headed back through port security to meet up with the excursion contact right outside of our ship. Just like last time, she escorted us to the end of the dock, where we hopped on the boat and headed out to Buck Island. One quick note here, there were only 13 of us on this trip (the three of us, and 10 from the Norwegian Spirit). Last month, the same boat had 49 people. The number of people wasn’t a problem at all last month, but having a smaller number was really cool, as we got twice the amount of time in the underwater scooters because of it. Apparently there were 34 people from the Carnival Valor that were supposed to be on the trip, but their ship was an hour or so late to port, and the BOSS folks couldn’t wait. Sorry guys, but we had fun without you :).

If you’ve never seen an excursion like this before, check out the video I put together from last month’s trip:

Honestly, this is one of the best excursions I’ve done to date, and would highly recommend that anyone coming in to St Thomas check it out. Well worth it, and I can’t say enough about the crew, they’re awesome! 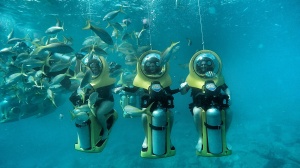 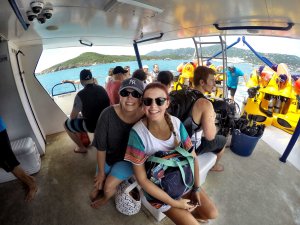 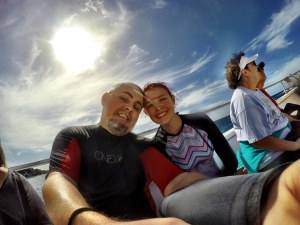 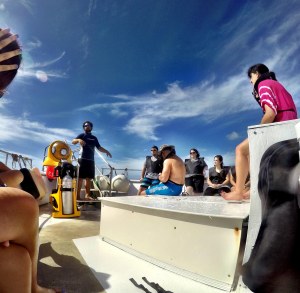 We got back to the dock around 3:30 and decided to head up to the infinity pool at the back of the ship to hang out for a bit. Turns out, the infinity pool isn’t so infinity in port, as the water level is lowered to cover only the regular pool area. Kinda lame, as was the fact that they only had the water slide open from 10am-1pm today. Huh? When we were in port here last month, the Escape’s Aqua Racer was open the whole time, allowing us to give it a go after we got back from our excursion. Oh well.

After getting cleaned up, we headed to dinner. It was another good dinner in the MDR tonight both from a food and service aspect, so we seem to finally be on a roll here! I started with the chilled pineapple pina colada soup, followed by one of the entrees as my second course, the Surimi mac and cheese. Both were good, but it was my main course I was really looking forward to, the prime rib. Mmmmm. This was also the first night that any of us had a steak-based dish where they asked how we wanted it cooked. I ordered mine medium, and was not disappointed. I finished the meal off with the sugar free bread pudding with vanilla ice cream, which was also delicious. 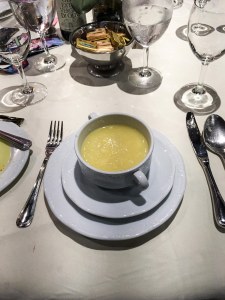 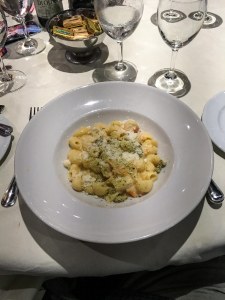 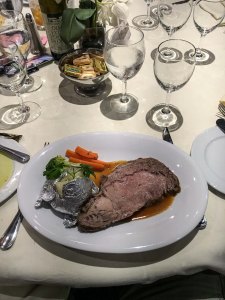 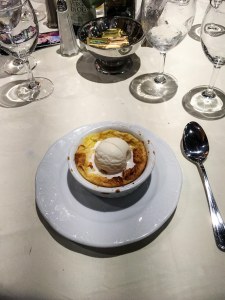 We got through dinner by 7pm, so we decided to hit the early show instead of waiting for our normal seating. Tonight’s show was Treasure Island, complete with pirates, acrobatics, hand balancers, and even an illusion thrown in for good measure (and some other cool stuff I’m sure I’m leaving out). Definitely an awesome show, and one that you shouldn’t miss when sailing the Divina. 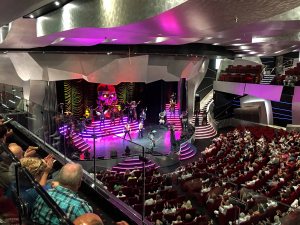 After the show and another round of bingo, we headed up to the F1 simulator so that Bayley and I could give it a go. That thing is definitely harder than it looks, but it’s an absolute blast! I was trying to be fully technical with it, focusing on shift points, corner apex, etc, and just kept missing corners and spinning. Bayley drove around the track in 7th gear one lap and easily beat my best time. Grrr…. It’s really fun though 🙂 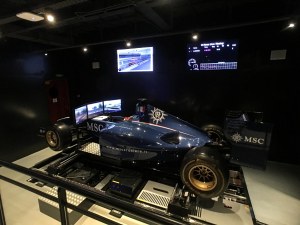 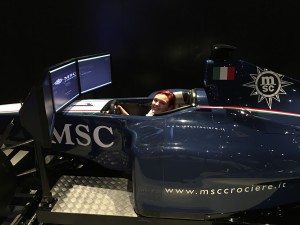 Not much else for tonight. With an 8am arrival in San Juan on tap, we all wanted to get some sleep, so we didn’t make it to the White Party. There are a couple of annoyances I wanted to call out though:

Nothing major, just things to be aware of. All in all it’s been a great trip so far, and we’re glad that we have the chance to finally try out MSC!

We don’t have anything planned for San Juan, we’re just going to get off the boat and see where the day takes us. From here in St Thomas, good night! 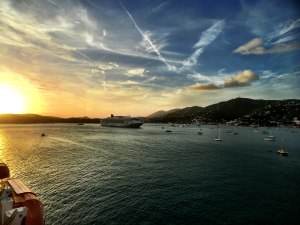