This year we decided to do Thanksgiving in the Orlando area. With Bayley only having the 4 day weekend, a longer trip was out of the question, and hanging out in Florida for a few days seemed like fun. As part of that, we had to decide where to eat for Thanksgiving, and after some discussion, decided to dine at one of the Disney resorts. We’d been going back and forth on exactly where that would be, but in the end decided (pretty much at the last minute) that we’d have a couple of meals at Disney’s Polynesian Village Resort. We were spending a little more than we wanted to, but with no plans to visit any of the parks, figured we’d enjoy the meals.

Dinner #1 came Wednesday night, a few hours after we got to Orlando, at the Spirit of Aloha Dinner Show. My mom and step dad were here for this one too, as they’d been in St Pete for a few days visiting Bayley at Eckerd, and drove up to Orlando with her and stayed with us overnight (they flew home Thursday). My wife had been constantly searching the Disney Dining site in the days leading up to the trip, and saw a table open up for ths show, so we grabbed it. Turns out that table was in the very back of the theater (upper floor 2 section), so we were a ways away from the stage. No biggie, we could see just fine. The food was good, at least the ribs and chicken I had. My wife enjoyed the pulled pork, too. The dessert, a warm pineapple bread pudding with caramel sauce, was delicious too. We got a little bonus food, too, as one of the guys at the table next to us knew the executive chef, who brought him over a large plate of steak and shrimp from ‘Ohana, and they shared it with us, too. Delicious, and a nice little bonus on the night. Huge thank you to him and his friends for that!

On the not so good side is just about everything else. The service was not up to Disney standards, as our server was really struggling to keep up. Other sections around us were already on to the main course by the time we got our drinks. At one point another server had to step in and help get things caught up in our section with main courses. Our dessert didn’t arrive until after all of the other servers had completed their service for the main part of the show. All in all just not the service experience people typically expect out of Disney. The show itself was a bit cheesy, too. We all really liked the fire dancing portion, but the rest of the show really seemed geared towards little kids, a fact that was very evident early on when they performed their own version of the Hawaii Five-O theme song (not really “traditional” ;)). All of the young kids seemed to be enjoying it, and really the only way I could recommend the show is to those who have young kids. For those who do go, one tip: Go to the late show (8:15pm). It gets out right as the fireworks at Disney are starting, and you can easily see them from just outside of the stage area. My pic of it below is pretty bad, but only because I took it with a phone camera in low light 🙂 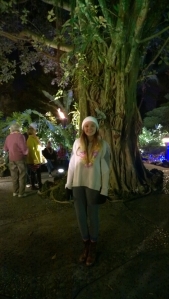 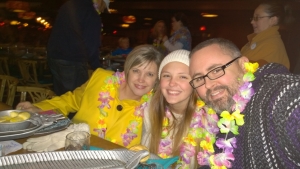 Dinner #2 was the following evening on Thanksgiving. This one was also at the Polynesian, this time at ‘Ohana. This had been our target restaurant for Thanksgiving from the start, and it took quite a bit of checking on the Disney Dining site to find an opening for Thursday. We’d eaten here once before, a long time ago, and were looking forward to the food, and it did not disappoint. The steak was delicious, as was the pork. Now I’m not sure what was up, maybe it was just us, but our service here was basically a mirror of the night before. Sections around us getting great service, while once again our server was struggling to keep up. I’ve worked in food service and understand that there are off nights, but two nights in a row at a place that prides itself on service seemed very out of character. Regardless, it certainly wasn’t anything to ruin the night, we left full and happy :).

Other restaurants we’ve hit during this trip (which doesn’t end until tomorrow morning):

Mia Pizza, near the condo we rented. Good pizza, which I finished off for breakfast this morning. We got a couple of larges since there were 5 of us, along with some garlic bread, which was also yummy.

A N.Y. Pizza House, which we ate at for lunch on Friday while we were in Cocoa Beach. I had two slices, one regular crust and one Sicilian slice, both with pepperoni. The slices were delicious, and huge. Had I known how big they were I’d have skipped some of the cheese fries we had as an appetizer (also delicious). My wife and daughter both had pasta, (baked ziti and fettuccine Alfredo) and neither really liked them all that much. They did agree that my pizza was delicious, tho :).

That about covers it for the food. Other meals were either at chains or here at the condo, and all we have left tonight is Hard Rock before a show, so I’ll skip the rest of it as I’m not big on reviewing chains.