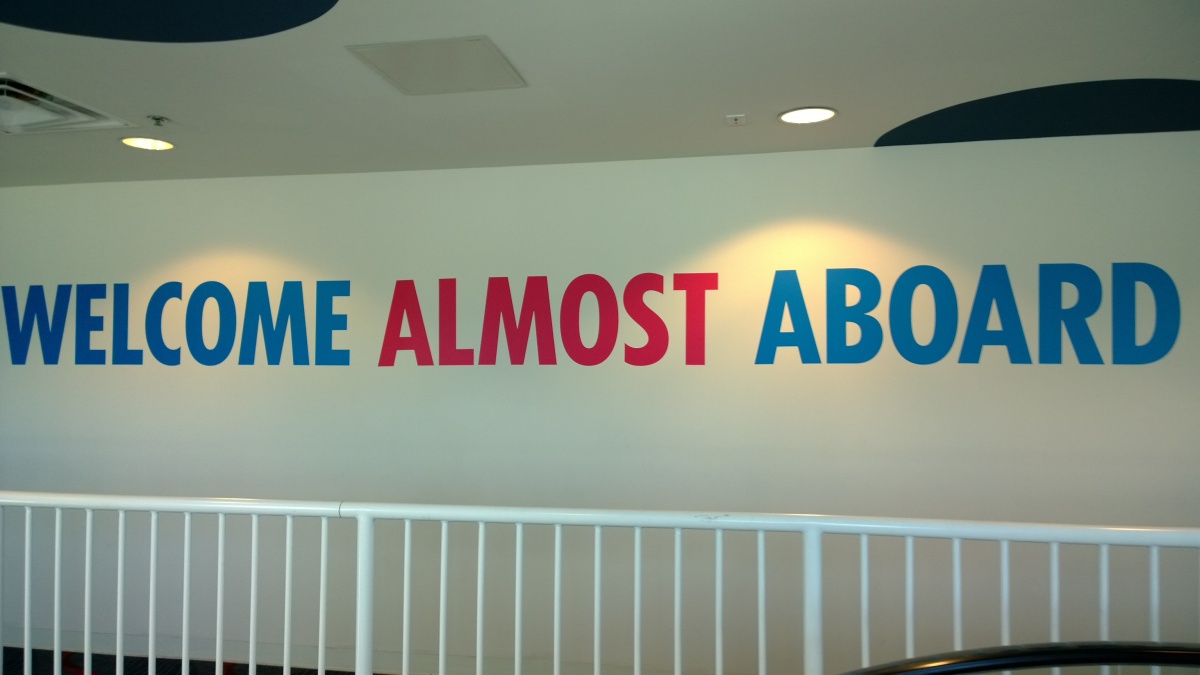 One year ago today, we were boarding a ship to enjoy our third straight Thanksgiving on a cruise. As I sit here and look back on that today, I realize just how much I’ll miss not spending Thanksgiving on board this year. Couldn’t be helped, though, with our daughter Bayley at college this year, we didn’t really figure her schedule would cooperate, and this isn’t grade school anymore, you can’t just pull a kid out of college classes for a few days and expect the professors to let her make that work up. The education comes first. Thankfully, we’ll still be spending the holiday with her, as we’re driving down Tuesday evening to spend a few days with her. More on that at a later date, for now let’s head back to last year.

Thanksgiving on a cruise ship is a blast, no cooking or cleaning to worry about, no stress of hosting family, just a week of relaxation and fun. On this trip, my mother and step-father were with us, as they wanted to take us all on one last family vacation before Bayley started college. Frankly, without them paying most of our fare, our string of Thanksgiving cruises would have been broken, as we simply weren’t in a position to do a cruise last year. So let’s look back on that week:

The Breeze is the largest ship we’ve been on to date, and we were all interested to see how that played out. It also represented a departure from the normal decor that adorns most of the contemporary lines (gaudy chic? :)). The breeze’s decorum is definitely one of my favorites to date: 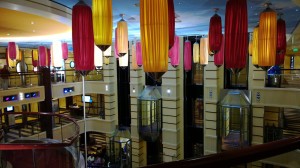 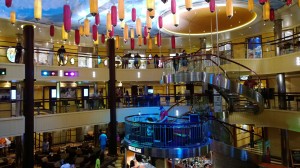 The ship was very easy to navigate, and offered plenty of food choices. I enjoy a good burger, and definitely liked being on a ship with Guy’s Burger Joint. The Pig Patty was a winner for me. Additionally, BlueIguana offers a delicious steak burrito. Another yummy stop was Fat Jimmy’s C-Side BBQ, which is only open on sea days. We tried it on day one, and overall wasn’t bad. The line’s generally kinda long right when it opens, so if you go, wait until it’s been open an hour or so. Frankly, Guy’s and Blue Iguana are the same the first day or two. Regardless of th wait, it was nice to have more than just the buffet and pool grill to eat at. My only complaint was the pizza station, as it takes way too long to get a slice of pizza on a Carnival ship. We experienced that on our previous two Thanksgiving cruises (both on Carnival too). Minor annoyance most of the time, but after skipping dinner to spend extra time in Curacao, pizza was one of the only things open when we got back on board, and if I recall, I waited 45 min for two slices. Yikes. Eh, we were on a ship, so one little thing like that’s not going to ruin my day.

Activities on the Breeze were in abundance. As I’ve mentioned in past posts, we love to stay active on sea days, especially if there’s a trivia event, which there were plenty of on the Breeze. We attended several, and even managed to win a couple. It is amusing to watch the people who take trivia on board way too seriously, too. Arguing with the person running trivia over whether an answer is right or not (especially when you’re blindingly wrong) seems a bit ridiculous when you’re on vacation, but to each his own. It’s all in good fun, and it’s not like the prize is super valuable, although I admit we enjoy winning them, and have at least one from each of the four Carnival cruises we’ve been on. 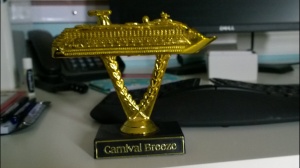 The ship has several things to do outside of scheduled activities, and we took advantage of two of them. The water slides were an absolute blast, as was the ropes course. The course is situated up high and provides a great view of the ocean on a sea day. I’ve got GoPro footage of my trek around it, definitely a highlight of our time on board.

We broke one of our rules on this one, as all four of our stops were back to back. Normally we like an itinerary that breaks it up, but for this trip it was a no-brainer. We went easy with activity scheduling to avoid getting all stressed about planning. I’ll lay out what we did stop by stop. Some of this is probably a repeat from my ‘Choosing Cruise Excursions‘ post, so I won’t go too deep, but we had a blast in every port!

Grand Turk: This was our planned beach day. It’s a tiny strip of sand with little to do, and served as an excellent choice for hanging out on the beach since you basically walk off the ship and right to the beach. We did walk through the shops, picked a couple of things up, etc, but overall just planned to lay on the beach or snorkel. While we were hanging out on the beach, someone came by selling helicopter tours. After he walked by, we discussed it and decided to spend a little money and have some fun. My wife stayed behind, concerned about her motion sickness, so it was just four of us. Since we had a group, they cut $10/pp off the price for the 8-ish minute ride, for a cost of $40/pp. We had an absolute blast, and had a great view of our ship and the beach where my wife was waiting for us. Well worth the money in our opinion, and frankly I think my wife would have been fine, it was a very smooth ride. 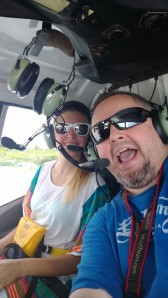 Dominican Republic: For our second stop, we’d booked a dune buggy tour ahead of time with Pro Excursions. While the port experience was one of the worst we’ve had (covered in that past post I mentioned above), the dune buggies were an absolute blast, one of my favorite excursions, and any stress getting the correct taxi was worth it. We were covered in mud when we were done, and smiling the whole time. I think the pictures say it all 🙂 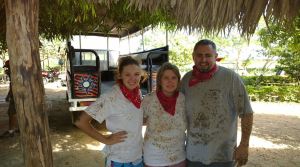 Curacao: We got off the ship with no plan whatsoever. We figured if there were tour guides offering island tours at a good price, we’d grab one, but if not, we’d just walk around and shop. As we got off, we found the tour operator stand, and grabbed a cheap tour. It was a little over two hours, if I recall, and half of that was probably spent in traffic :). Beautiful island, but they definitely share some of the traffic problems cities in the US have. Our time in port was 2pm -11pm local time, and by the time we got back from the tour, most of the shops were starting to close up. We were able to do a little shopping, and did walk around the area a bit.

Aruba: We had a blast here. My wife had set up a private tour before we went, so it was just the 5 of us in a van with the guides. The tour took us all over the island, and included stops at Philip’s Animal Garden and a local donkey sanctuary (among regular scenic stops). Our guide had lived on the island most of his life, and obviously knew his stuff. This was a 5 hour tour, and we enjoyed every minute of it, as it basically took us from one end to the other. When we got back, we walked around the shops for a while, picked up a few things, and headed back to the ship not long before departure. Aruba is a very beautiful island, and is on my short list of ones I want to go back to. 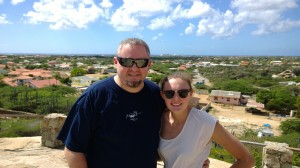 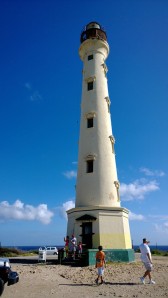 We also bought Faster to the Fun passes for trip, which I know some people don’t think Carnival should sell. For those who aren’t familiar, they sell a limited amount per cruise, and a single FTTF pass covers everyone in the cabin. Benefits of the pass include priority boarding, priority tendering (which we didn’t need on this trip), stateroom available as soon as you get on, priority line access at guest services, and priority debark. My main reasons for getting it were priority embarkation and debarkation, as being Gold level we wouldn’t otherwise get priority there. We treat boarding day as an extra sea day, and like getting on as soon as we can. For debarkation, Charlotte’s an 11 hour drive from Miami, so getting off as early as possible helps me get home in time to some sleep before I have to go back to work the next day. We bought a pass for my parents cabin, too, and we all found it worth the cost ($50 per cabin). For the first time in a long time, I had to use guest services for a couple of things, and not having to wait in the long regular line was a huge benefit.

Overall, this was one of our best cruises to date. A great crew, plenty of activities, and some great stops made for yet another awesome Thanksgiving on board a Carnival ship. I highly recommend cruising over turkey day at least once!

One thought on “Turkey Day on a Ship”