Having been forced to eat non-cruise food for almost a week now, I figured it was time to go back and relive everything we had to eat on the MSC Seaside. In my ‘initial thoughts‘ post I talked about the service issues we encountered in the MDR and at the buffet, so I’ll skip those here and focus on the food itself. I’ll be starting with the buffet food and working my way up to the Teppanyaki specialty restaurant, so stick around and enjoy all of the pictures along the way!

When I think of an MSC buffet, the first thing that comes to mind is the pizza. Oh that glorious pizza. It’s one thing I really look forward to when we set foot on an MSC ship, so the Seaside had a lot to live up to. I’ll just say she didn’t disappoint, and I was happy to enjoy the buffet pizza more than once. It felt slightly thinner than the buffet pizza on the Divina, which is fine with me, but in the taste department, I was completely satisfied. The other thing I liked, something else I mentioned in the initial thoughts post, is that there are multiple pizza stations in the main buffet on deck 8, and when the buffet was full of people, I don’t recall a single instance of having to wait for a slice of pepperoni, they seemed to be keeping up with demand just fine.

The rest of the buffet was actually pretty good, at least what I had, with one exception, the bacon. For whatever reason, most of the time I got bacon in the morning, it was fairly flavorless. I’m not really sure how you can do that, but when I’d find warm, crispy bacon, it just had no flavor to it. One morning I tried some softer, slightly less cooked bacon, and it had a decent flavor to it, but for whatever reason, anything resembling crispy bacon had none. Outside of that, I enjoyed the buffet, and once I discovered the soft warm pretzels, I was in heaven:

The last day we also found some corn dogs up on the smaller deck 16 buffet, and they were pretty tasty. I think you see where I’m going with my buffet choices here, I basically eat like a kid in there :). That falls in line with one tip I posted early on, they have delicious fries, and some pretty good mac and cheese (only found the mac and cheese on 16 though), and when you combine them, you get total deliciousness:

#MSCSeaside #buffet tip: That extra cheese from the #macandcheese makes a great dipping sauce for the #fries 😊🍟

One other thing to mention with the buffet is the ice cream. If you’re looking for a soft-serve machine, save yourself some time and head up to the deck 16 buffet. It appears (unless I missed others) that the only soft-serve machine on the ship is located in the ‘family & kids’ section up here. The nice lady behind the counter was quick to get everyone cones, so it’s not a big deal, just don’t forget about it if you want ice cream:

#MSCSeaside tip of the day: if you're looking for soft-serve, head to the deck 16 buffet and look for the "family & kids" area. Here, a nice woman will hand you some tasty #icecream🍦. I totally forgot about this all week amid the gelato we've been enjoying 😊 #ThePlaceToBe

While I’m talking about ice cream, let’s also talk about the gelato. The Aurea experience includes the non-premium unlimited drinks package. That drink package includes gelato! Did we take advantage of that? Heck yea! Even on the 2-day sailing we made stops at gelato stands pretty often. Their gelato is soooo tasty, it’s worth at least one try. It’s offered in cups, cones, shake, and even in bar form. I absolutely loved the bars (lemon and dark chocolate were my favorites), but during the Christmas sailing they were hard to come by, as the gelato stands were having a hard time keeping it in stock, as this stuff is all made fresh. Regardless, my goal of at least one cup/bar of gelato every single day was met, and I enjoyed all of them. There are multiple places to get gelato on the Seaside, be sure to try them all!

These things are the BOMB! I mean any #gelato on an #MSC ship is good, but wowza this #darkchocolate bar was delicious 😊 #MSCSeaside #ThePlaceToBe

What's a day like on #MSCSeaside without #gelato? I don't plan on finding out 😊 #ThePlaceToBe

Next up, the MDR! As Aurea guests, we were assigned any-time dining in Seashore restaurant on deck 5 aft. For this sailing, the starboard half of the restaurant seemed to be reserved for Aurea and Wellness any-time passengers. You enter the MDR down a little side corridor on the starboard side, are greeted by a very friendly hostess who then takes you to an open table fit for a party of your size. I don’t think we ever had to wait to be seated more than 5 minutes on any night. I should note that we also ate here for lunch twice, and like any cruise ship MDR at lunch, you just walk in the main entrance, tell them how many people you have, and they seat you pretty quickly.

As far as the food, I’d say pretty good! The various pastas and lasagna were easily the best in my opinion, but everything else I had was good too, except for the Philly cheesesteak I had in there for lunch one day. The bread was fine, but the meat and cheese just weren’t up to snuff in my opinion. Jen had some short ribs one night she wasn’t a big fan of as they were overcooked, but outside of that, I think we were all pretty happy with our food choices. The menus themselves usually had a decent variety, save for the holiday and elegant menus, which didn’t offer the ‘classic menu’ options, the things you can get any night if that night’s choices didn’t appeal to you. Here’s a sampling of the menus, along with some of the items we had: 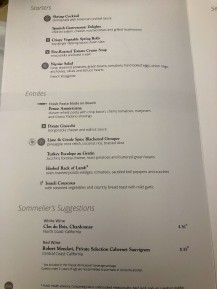 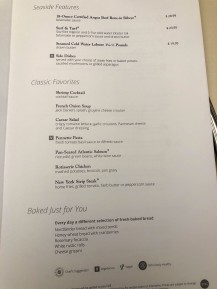 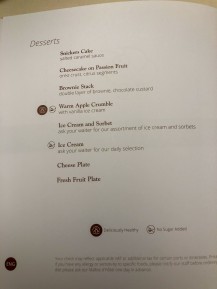 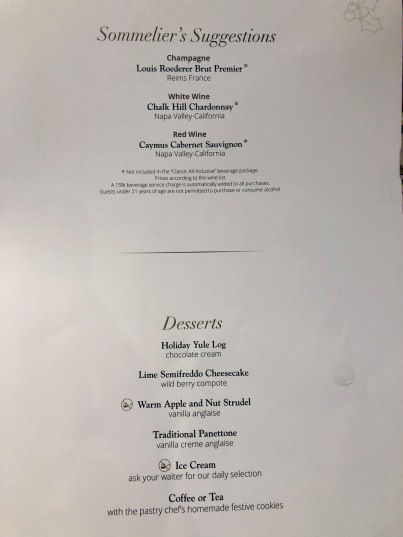 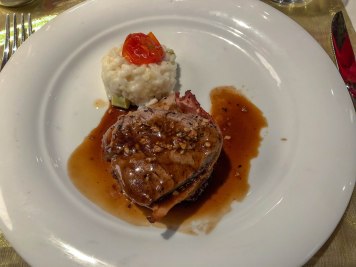 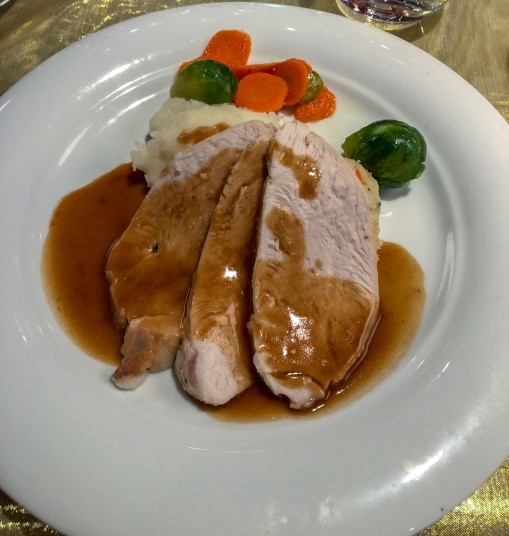 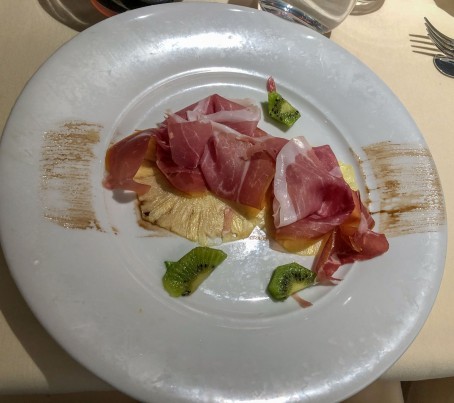 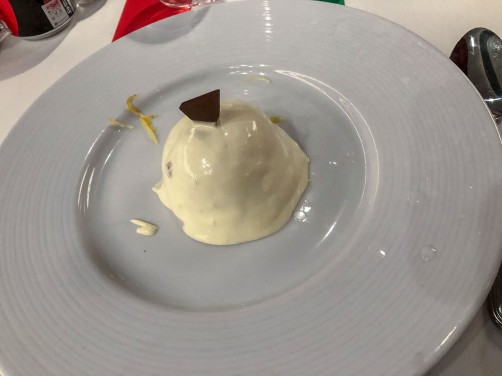 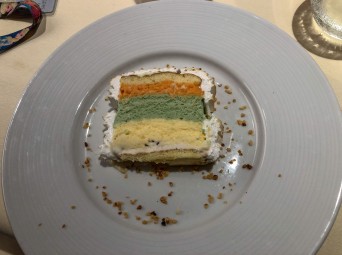 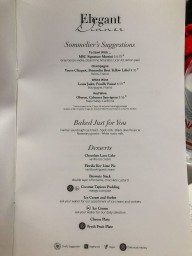 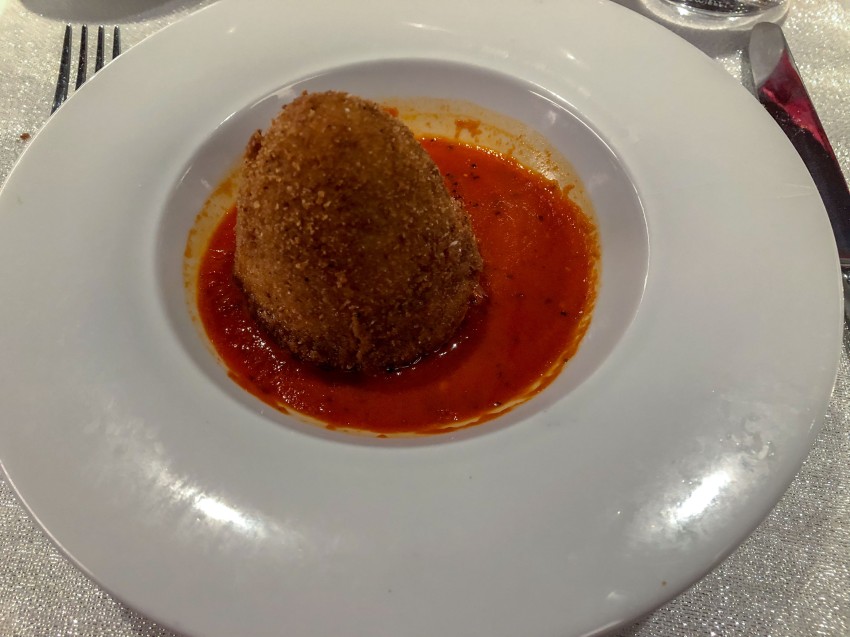 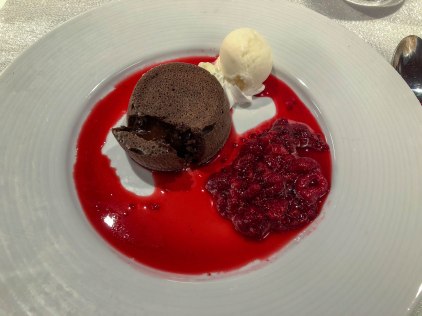 Chocolate lava cake. So much goo 🙂 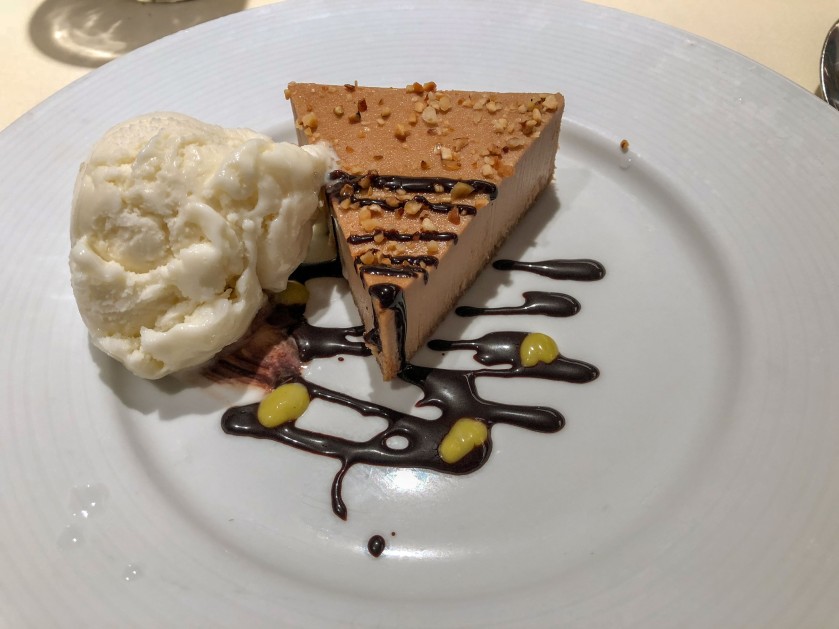 Last but certainly not least, let’s talk about the specialty restaurants! While I wish we’d have also tried the steakhouse, we only ended up going to the Teppanyaki restaurant, which is one of the three venues in the Asian Market Kitchen by Roy Yamaguchi. I mentioned in my ‘5 things we’re excited for‘ post that I was really looking forward to eating here, which we did for lunch on Christmas eve, and it did not disappoint in any way. We also got a small sampling of it during the two day inaugural, and while the food we sampled was excellent, nothing prepared me for how good the entire experience would be.

We had a noon reservation, and once seated, realized we were the only ones in the place. Not sure if people didn’t realize you could eat here for lunch right away, didn’t realize it existed, or simply didn’t want to pay the premium, but it was kinda cool to have our chef and the staff in there all to ourselves, at least for a while, as another family did show up ~12:45, followed by a group of officers around 1:00. Everyone working in here was excellent, starting with the wait staff all the way up to the chefs who made our food. They were very accommodating on some changes to the menu Bayley and I asked about, namely subbing chicken in place of the salmon and noodles in place of the sushi on the set course we were ordering, which is the “Sencho” option on the menus below (click a page to see it larger) 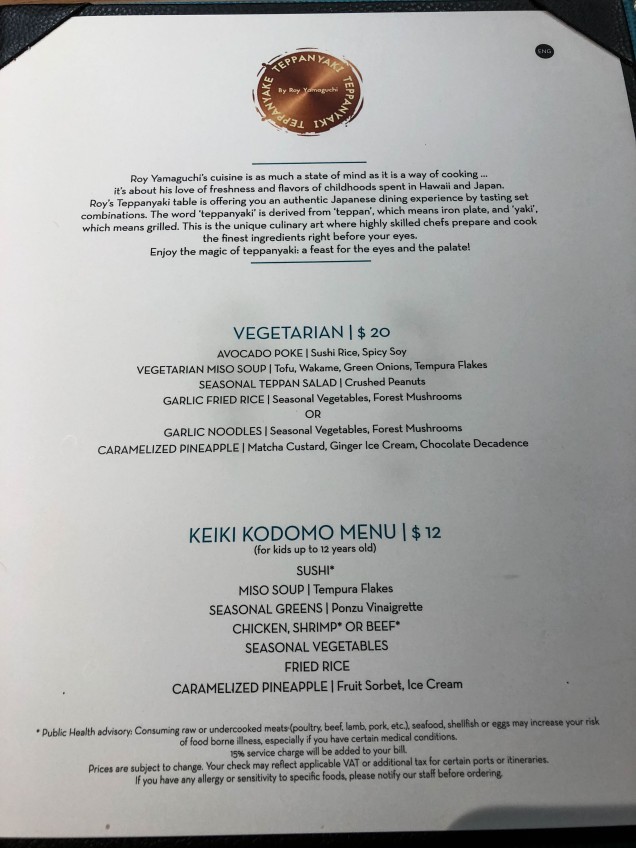 Every single thing I ate here was delicious, and our chef was outstanding, making each course at a perfect pace, and cooking everything exactly as it should have been. I’ve mentioned in past blog posts that I’m not a shrimp/seafood guy, but I decided to give those huge shrimp a try, and was not disappointed, I started questioning whether I should be avoiding shrimp at all! The chicken he made us was also really, really good, and cooked perfectly. By the time it came to the filet I was ready for a little red meat, and it too was outstanding, cooked exactly as I’d requested. He also cooked some of the best noodles and rice of any Teppanyaki-style place we’ve been to in my opinion. Again, everything that hit my plate was delicious. I highly recommend giving this place a try if you’re on the Seaside and looking for something outside the normal MDR experience one night. You won’t be disappointed! 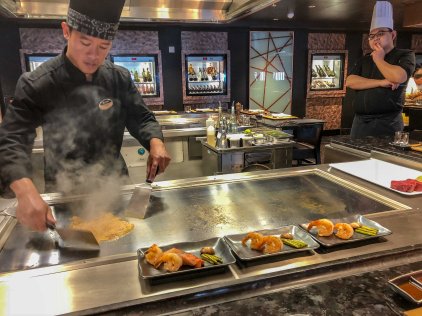 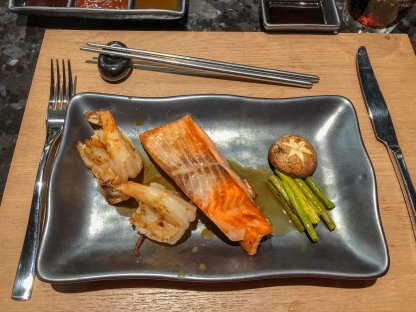 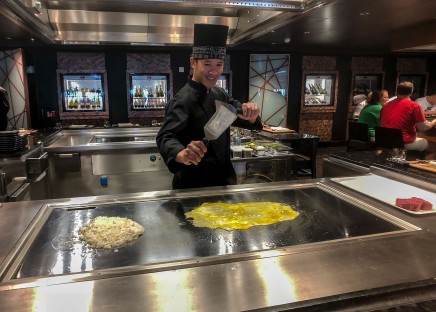 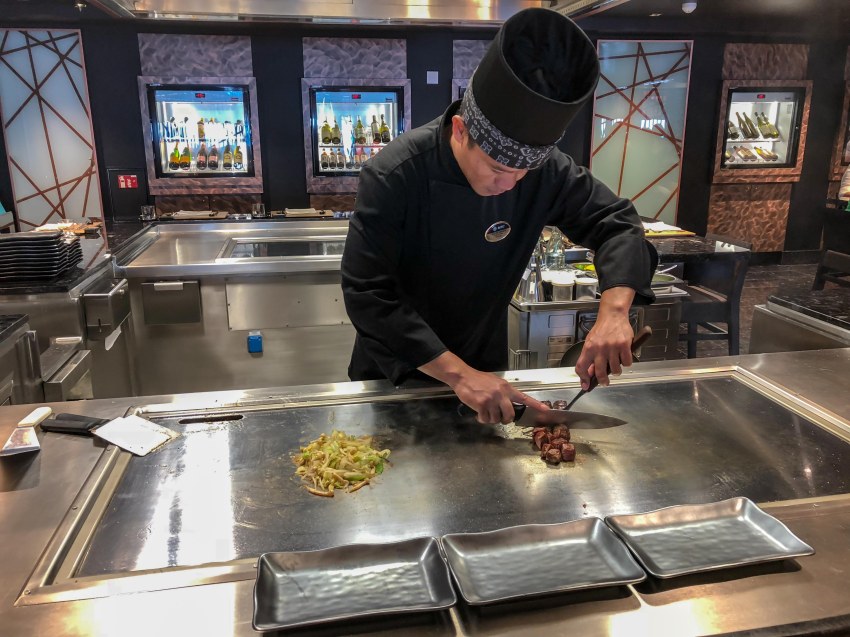 All in all, we were pretty happy with the food we had all week. I’m no foodie, and Jen likes to claim that Bayley and I only eat yellow food, so your experience might vary, but for me, I could spend another week on this ship eating what it has to offer and be totally satisfied! Next time, maybe we’ll spend the week eating at a different specialty restaurant each day, or maybe we’ll just eat Teppanyaki each night 🙂