Embarkation is a love/hate thing with me. I love that I’m getting on a ship, but I hate the wait and crowds associated with it. We consider it another sea day, so we like to board as early as possible. While I’ve read others state that boarding’s not so smooth with MSC, we found it to be one of the easiest we’ve had.

Ignoring the 2pm time on our boarding passes, we pulled in to the garage at the port at 11:30. From that point, we dropped our luggage with a porter, went through security, and were at the desk checking in by 11:50. Not too shabby. They gave us a boarding card with the number 6 on it, designating our boarding zone, and we headed over to some empty seats to sit. This is where it got amusing.

Shortly after noon they started boarding. One little issue, however; passengers here seemed to be far more pushy than any past boarding I recall. A large group of people were huddled up by the boarding entrance, similar to what you see at an airport gate, and just like those situations, most of them had later boarding numbers. They made multiple announcements to try and get people to move, and sent a guy over to try and force people to make a hole. It only partially worked. You can see the crowd on the left side of this shot.

Regardless, our number was finally called, and we headed up. As I was entering the line, some lady about ran us over with her suitcase as she pushed past, only to stop at the top of the escalator to let us all go so she could wait for someone who was way back in line. Seriously people, you’ll all get on, relax.

Once on board, we walked around a little, checking out the Divina’s beautiful lobby before heading to the buffet for some food. The eats on the buffet were hit or miss. The pizza is outstanding, and easily the best I’ve had on a ship. The burgers and hotdogs were barely warm, fairly bland, and for some reason the burgers had mayonnaise already on them. I look forward to giving the buffet another run when it’s in full swing on a sea day to see if that was a fluke. I definitely look forward to more pizza, too 🙂

After a bit more exploring, we headed back to our rooms to unpack. Jen and I have a balcony on 9 that’s rather small, and has me missing our balcony on the Escape:

Bayley had an interior on 12 that has a better layout and more storage than our room: 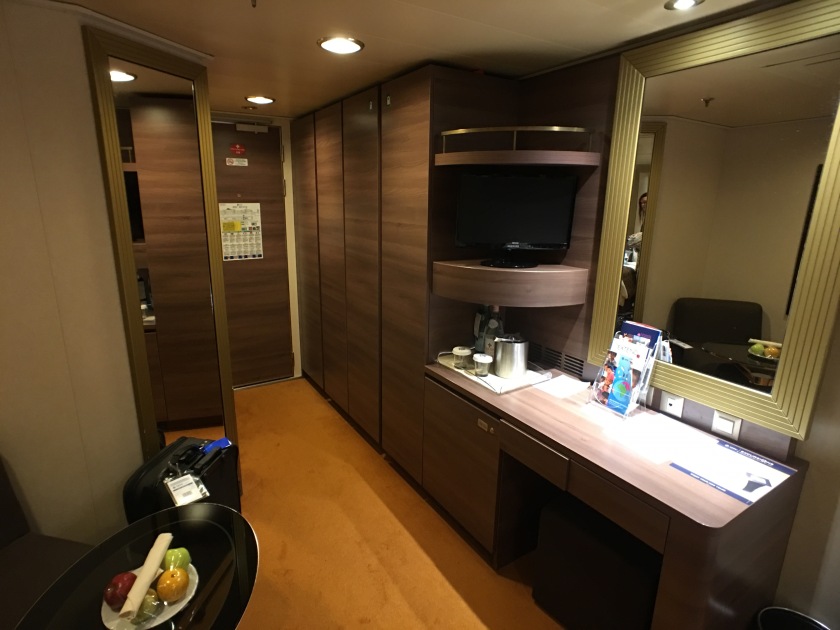 Moving on, after an amusing 5pm muster drill that saw most people wearing their life vests when we were told we only had to carry them, we headed to dinner. We have early seating, which is earlier than we’re used to (5:45pm).

Being the first night, I’ll reserve overall judgement, but the service wasn’t the best, and the food was hit or miss. Bayley and I ordered fettuccine Alfredo as our main course, which was really good, but the portion we got was that of a side, not a meal. For dessert, toffee cheesecake and the cannoli. The cannoli was amazing, one of the best I’ve ever had. The cheesecake was just okay.

With dinner over, we headed to the welcome aboard show. The singers were really good, but the song choice seemed to target an older demographic, and we all agreed it was a bit boring. Being that the acrobatics weren’t a part of this one, we’re looking forward to the shows that do include it.

One quick note, this is one of the most beautiful theaters we’ve seen on a ship. There don’t appear to be any obstructed views, and the seats are comfortable, save for the lack of legroom. The seats also appear to be staggered in a way that attempts to avoid your view being blocked by the person in front of you. 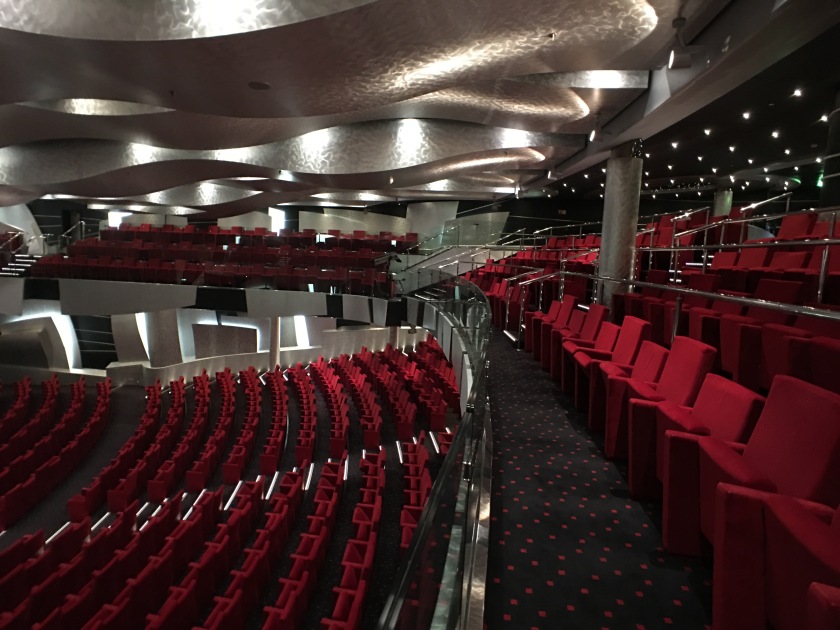 After a little stint in the (smoke free!) casino, we hit the 10:30 trivia, which was an absolute blast, before heading off to bed. The entertainment staff on the ship has been great so far, so we’re really looking forward to the sea day activities.

All in all, a good embark day. With two sea days ahead of us, we’re looking forward to exploring the ship, playing some more trivia, and relaxing :).