Last week I had the opportunity to hang out in downtown Seattle thanks to an internal tech convention my company holds every six months. The title of this post reflects the reality of flying from Charlotte to Seattle, as I never quite got used to the time change. I was up pretty late every night (11pm-12am), and somehow managed to wake up between 4am-5am every single morning.

Anyway, for those in the tech community, think of it like (what used to be) TechEd or the replacement conference, Ignite, but it’s internal-only for those ‘Softies in the Services division around the world. It gives us a chance to hear from our peers, the various product groups, and more importantly, a chance to network. It’s been a few years since I’ve been, and with some important releases coming up within my technology space, I figured it’d be a good time to go. I won’t bore anyone with the technical side, but it was worth it all around.

Outside of the technical sessions, what else do we do while we’re there? Well, a variety of things. I won’t bore anyone talking about the conference food, which really wasn’t all that good at any point in the week (which is true for any conference I’ve ever been to – I can’t imagine it’s easy to feed large numbers of people for 5 days), but in this post I’ll briefly discuss a few of the restaurants we ventured to over the week:

After arriving Sunday evening, three of us headed to the waterfront to get some food. We were all pretty hungry, and quickly settled on The Fisherman’s Restaurant.  I’m not a seafood guy, but this wasn’t an issue as they had a perfectly good New York steak on the menu, which came with some delicious roasted potatoes. All in all it was really good, but didn’t even come close to being the best meat I had all week. 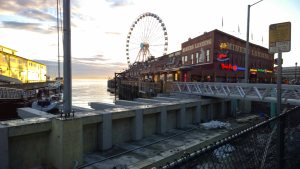 A couple days later, we ventured down to the waterfront again. Earlier in the day, I’d scouted out a place that looked awesome, Radiator Whiskey (a description of ‘Meat, Whiskey, Beer‘ will get me every time), but it wasn’t to be, as they were booked until after 9pm. Brushing our disappointment aside, we walked around a bit more until we ended up down in the same waterfront area where The Fisherman’s Restaurant is. This time, we stumbled on Elliot’s. In a word, excellent. Once again, I had the New York steak, and it was easily better than what I’d had Sunday night. This one came with some delicious garlic mashed potatoes, and as shown in the pic, I added a glass of Whistle Pig 10yr Rye, which I enjoyed as well. The place is a little pricey, but the food and service were excellent. Of the restaurants we visited, this was probably my only disappointment. I ate here for lunch on Wednesday to meet up with members of one of my account teams, as we’re scattered all over the east coast, and for the most part hadn’t had the chance to meet in person before.

I had the beef burger, and while it was fine (the fries and garlic aioli were the best thing on the plate, imo), it was the overall lunch menu options that left me a bit disappointed. That’s not on the chef, that’s on me. I’m fairly hard to please, and don’t really go for the more fancy fare. I’m very much a meat and potatoes kind of guy, so I was glad they at least had a burger on the menu. Regardless, it was nice to meet everyone face to face for a nice relaxing lunch that didn’t involve the conference food.

On the last day of the event, a couple of us had really had our fill of the conference food, and decided to step out and find some pizza. We’d noticed MOD while walking around over the course of the week, so we headed there, and were glad we did. I’m a fan of thin crust, and ordered a mini Mad Dog, adding black olives and mushrooms, and it was delicious. I went mini so I could order some garlic strips as well. I wasn’t a big of a fan of those, as I tend to like actual garlic bread better, but live and learn. They’re apparently opening an MOD in Charlotte, about 6mi from where I work, so I see more lunch trips to MOD in my future 🙂 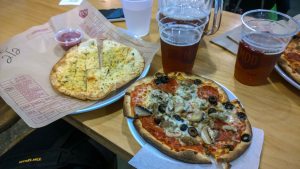 After seeing the menu and visiting the place in person during our failed attempt to eat here a few days earlier, a couple of us decided we weren’t leaving Seattle without trying this. I was able to get reservations on Friday prior to heading to the airport, and our persistence was rewarded. The place is pretty small, hence the difficulty getting in, but it’s a cool atmosphere with some really good food, and of course, more whiskey. I had the fried pork shank, and after spending some time studying the rather large whiskey list, decided to go with the staff recommendation, which was pretty good:

The pork was some of the best I’ve had in a long time, being perfectly cooked and just melting in your mouth. The herb aioli sauce it sat on was an excellent compliment to it as well. On the other side of the table, the guy I was eating with ordered something off the specials menu, which was some sort of turkey dish (not the confit). I generally despise turkey, but tried his, as the sauce it was cooked in looked delicious, and looks were not deceiving. That was some really good turkey!

That about covers it for the food. Several of us also hit YardHouse one night, but it wasn’t really for the food, so I didn’t feel like including it here. All in all, our restaurant choices proved successful, and I’ll definitely be returning to a couple of those the next time I’m in Seattle.

Next up: I’ll cover our conference event at CenturyLink Field on Thursday night!

One thought on “Sleepless in Seattle”