Hangin With the ‘Hawks

As mentioned at the end of my last post, part of our tech conference in Seattle  a couple of weeks ago included an evening at CenturyLink Field, home of the Seattle Seahawks. The event was held on Thursday evening, and while bus service was provided from the various hotels all of the attendees stayed at, a group of us chose to walk, as it was pretty nice out, and it really wasn’t that far from our hotels.

Upon arrival, we checked in (basically just showed them our attendee bracelet for the event) and headed in to the stadium. The first order of business was to scope out the setup and see what our options were drink and food-wise. Having never attended this specific event before (the last time I was at this conference, the attendee event was held elsewhere), I really didn’t know what to expect. I was pleasantly surprised by what we found. We were all pretty tired of the conference food, and were hoping that it wasn’t the same group catering this event, and turns out it wasn’t.

There were food options open on part of the club level and part of the field level, and it appeared to be the actual stadium food stands serving up some of their normal game-day food. Score! We walked the club level, sampling a few of the items up there, and then headed down to the field level food area to see what else was available. Over the course of that trip, I think I had a small cheeseburger, some fries, a Nathan’s hot dog, and some chips. Delicious.

After eating, we headed out on to the field. We’d actually started out down there, hitting the bar for a pre-dinner drink, and to watch the Breakdance Ninjas (there were no *actual* ninjas, but they were entertaining nonetheless), but hadn’t checked out any of the other activities. While down there, we ran across Taima the Hawk, very cool of them to have the handler bring the bird to the event. Being a 49ers fan, I was wishing I’d brought the tiny Niners jersey my daughter’s cat wears so I could have gotten a picture of it on the bird, but somehow I doubt I’d have gotten anywhere near Taima with that jersey in hand 🙂

After checking out Taima, a few of us got in line to attempt field goals, which I botched badly, kicking the ball dead center and sending it under the upright. One of the people attempting the kick:

After missing the field goal, we headed back inside to get some ice cream and rest a bit, then walked around some more, checking out a game of Jenga that was going on and watching people throw the football around the field. It was a fun event in a great stadium, and I thank the Seahawks organization for hosting/putting up with us! Some random shots from the event: 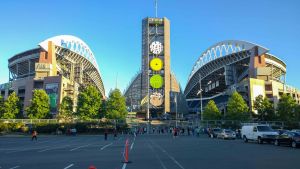 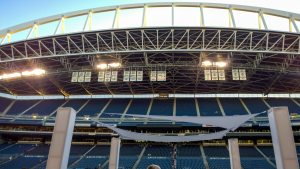 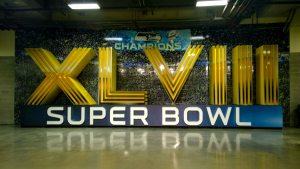