Our planned itinerary for day 2 meant taking the ferry to St George, and working back towards Hamilton from there:

But, much like day 1, it didn’t quite go as planned. What hurt us the most was getting up late. I was up at my normal time, around 7am, but everyone else seemed to be moving in slow motion. We ate breakfast a bit late as a result, and got off the ship at 10:32am. I only know the exact time because I happened to look at my phone to see what time it was as the 10:30am St George ferry was pulling away. Those only run once an hour, so at that point we knew our schedule was blown since the next one wasn’t until 11:30. To kill time, we walked through some of the shops around the dock area, and just after 11am, joined the ever-growing line for the next ferry.

That next ferry was 100% full, and not everyone made it on. Fortunately, they had another one waiting in the wings to handle the overflow for those who didn’t make the first one. We did make it on though, and were on our way to St George. The ride is roughly 40min long, and while on board, members of the tourism office talked about the things to do in St George, answered questions, and handed out local maps to anyone who wanted one. This wasn’t a sales pitch, it was just the local tourism board being helpful, and it was a very nice touch.

Arriving at St George, we decided to walk around the dock area a bit before heading up to the unfinished church. A few shots from the dock area, including our ferry heading back to Kings Wharf: 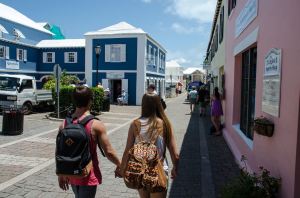 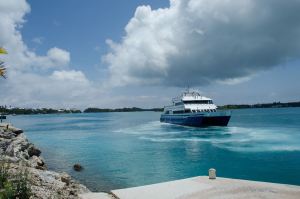 After walking through a few shops, we headed up to the unfinished church, and yes, it’s definitely unfinished :). The tourism people on the ferry mentioned that a couple of weeks ago, some cruise passengers got married in it, but it wasn’t open when we were there, so we just had to enjoy it from the outside. 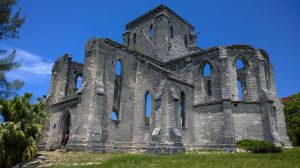 Our visit to the unfinished church complete, we headed to the nearest bus stop to make our way to the Crystal Caves. Once we got off the bus, we found something I’d read about a number of times before our cruise, the Swizzle Inn. Being that it was past lunch time by now, we decided to stop for a bite. 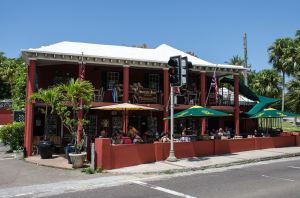 I had the Swizzle burger pizza, and it was absolutely delicious. I also tried a Rum Swizzle, a signature on the island, and while it was good, I’m not sure I get the “YOU HAVE TO TRY THIS!!!” hype people who’ve been there give off. Anyway, our stomachs full, we walked down the road to the Crystal Caves. There are actually two caves you can tour here, Crystal and Fantasy. We chose to stick with Crystal, but it did seem like a number of people were doing both. The tour of Crystal takes around 30 minutes, and is quite interesting. Our guide, while obviously very knowledgeable, was a bit overdramatic. It really seemed like his act was geared for a group of 1st graders, and not a bunch of grownups, but he was very friendly, and we learned quite a bit about the caves. 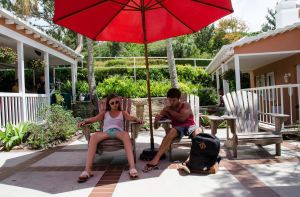 By the time our tour ended, it was too late to get in to the aquarium and zoo, so we headed back up the road to get some ice cream. Right across the street from Swizzle Inn is Bailey’s Ice Cream, and it’s definitely worth stopping here for a delicious treat 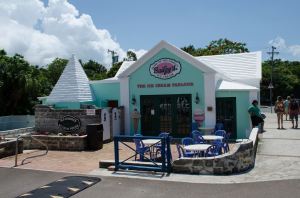 Once we were done, we decided to hop on the next bus to Hamilton, and catch the ferry back to Kings Wharf. Getting up late really limited what we could get done, but it also left us with more to see the next time we come to Bermuda. The bus ride from the caves back to Hamilton was very scenic, and gave us some time to relax and cool off. Upon arriving in Hamilton, we hit a couple of shops, then hopped on the next ferry back to the dock. We walked around the shops at the dock a little more as well, and my wife and I decided to stop at the water activity stand and get some info on the jet ski tours. The only thing we had on tap for day 3 was the beach, so we figured if the jet ski tours looked interesting, we’d slip that in too. After talking to the woman at the stand, we were hooked, and decided to book two doubles for the next morning.

With that set, and all of us being hot and tired, we headed back to the ship to get ready for dinner. Day 2 on the island was complete!