Focusing on the time we spent ashore in Bermuda brings a smile to my face. This is by far one of the coolest islands we’ve visited, and we see why so many people do the Bermuda cruise more than once. Also, because of everything I’d like to cover, I’m going to split this in to three posts, one for each day we were there.

We went in to this cruise far less prepared than we normally are thanks to a hectic schedule leading up to my daughter’s graduation. Normally we have all excursions booked with various operators a few months in advance, and for places we just want to walk around, we’ve done some scouting online. This time, the most we did was come up with a list of things we wanted to see while we were there, and drew up a rough idea of what day we wanted to do or see each thing.

Now, Bermuda’s a bit different than normal ports in that they have an outstanding public transportation system. When you get off the ship, there’s a little pink building where you can buy ferry/bus passes, and we’d decided from the start to buy 3-day passes to use while there and get around the island that way, versus using taxis or doing tour excursions. When we arrived in Bermuda, we decided not to get off right away to try and avoid lines at the ticket booth, so we waited about an hour, and ate breakfast on the balcony again.

Getting off the ship was easy, with very little wait (I love docking :)). We walked over to the transportation ticket office, and with only one person in line in front of us, got our 3-day transportation pass within a couple of minutes. Here’s a shot of the building where you buy the passes, the windows where they’re sold are on the left where the group of people is: 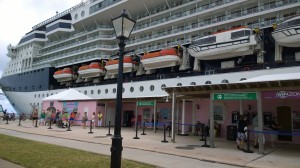 One tip here: they only take cash. The 3 day pass that we bought was $35 per person (current prices and more information are available here). Once we had our passes, we hopped the ferry to Hamilton. Our initial plan for that first day was:

But plans don’t always work out, right?  It was really humid during our stay, and as a result, things got moved around and removed from the schedule based on how hot and tired we were at any given time.

Anyway, we got to Hamilton and walked up to Fort Hamilton. The fort itself is beautiful, and sits up on a hill, providing some great views of the island. 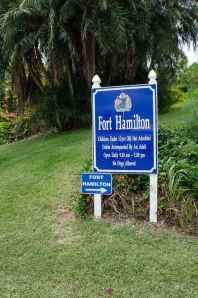 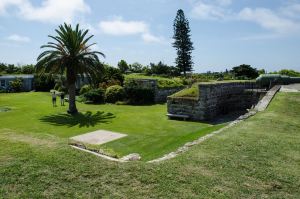 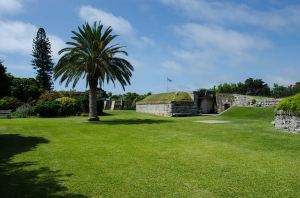 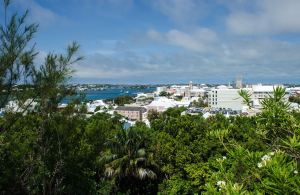 You can also walk down in to the area where the moat used to be, and even into the tunnels in the outer walls at the front of the fort 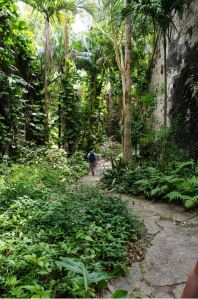 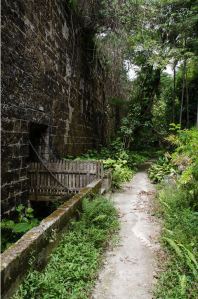 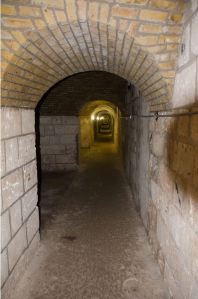 Now if you visit the fort, beware. When you walk down to the moat and into the tunnels, you do have to walk back up :). When you’re already hot, that climb seems unforgiving 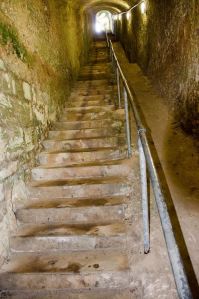 After climbing the stairs and walking around the rest of the fort, we decided to head back in to Hamilton to walk around and shop a bit on Front St. We stopped in a few stores, enjoyed some AC, and bought some shirts. Being that it was now around lunch time, we decided to head back to the ship and grab something off the buffet to avoid having to spend money on lunch. Once we ate, we checked out the shops around the dock area, including the Clocktower Mall. After spending a bit of time over there, we went back to our list to see if we could squeeze anything in before dinner. We decided to grab a bus and head to Somerset Bridge, which I’d heard about from a friend who grew up in Bermuda.

Somerset Bridge is claimed to be the smallest drawbridge in the world, and it’s on what basically seemed to be the main road from the docks to everything else. While on the bus, we weren’t sure where to get off for it, and the bus driver was more than happy to let us know when we should get off. Once our stop came, we found ourselves having to walk down the road hugging the stone wall on one side to avoid traffic, as the main road is two very tight lanes (In hindsight, I wish I’d gotten a picture). Once we got to the bridge, we quickly saw why it’s the smallest drawbridge (yes, that’s me) 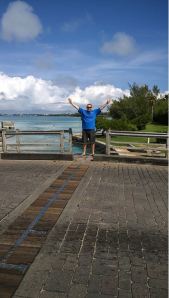 The opening is only 32 inches side to side, so I can definitely see how this is the world’s smallest.

After making our way back to the bus stop – oh, and another tip: blue poled stops take you away from Hamilton, pink take you towards it (more bus info) – we headed back to the ship to get ready for dinner. Having what more or less equated to a floating all-inclusive resort handy, my wife wanted to pay for as few meals as possible while in Bermuda, which is why we ate both lunch and dinner onboard on day 1.

After dinner, we headed back down to the ferry and took the ride over to Hamilton. During cruise season, they put on a little festival in Hamilton called Harbor Nights. We arrived a little before 8pm, and things were in full swing. There were quite a few tourists (duh), along with a line of vendors set up on Front St. In addition, there was live music, and booths selling delicious smelling food. In hindsight, I wish we’d skipped dinner on the boat and eaten at one of the booths. 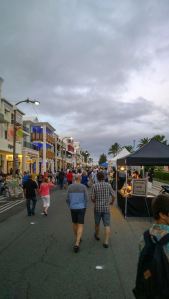 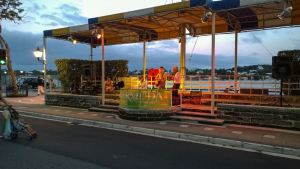 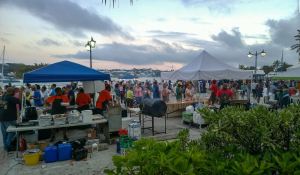 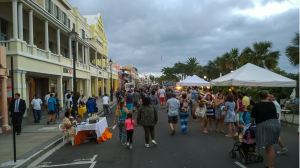 We really enjoyed our time there, and my daughter ended up buying a couple of pink sand picture frames for her and her boyfriend. One theme throughout our stay in Bermuda was that no one’s pushy in trying to sell you stuff, and Harbor Nights was no different. After we finished walking around and checking out booths, we stopped for snow cones: 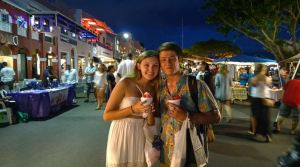 Harbor Nights doesn’t end until 10pm, but we’d pretty much walked it all and seen what we wanted by around 9:15pm, so we hopped the ferry back to the ship. I should note that the ferry is obviously more packed going to and from Harbor Nights, but the local transit authority does a good job of adding more boats as needed and getting people in and out quickly.

While we didn’t stick to the original plan, day 1 was definitely a success. The transportation system makes it very easy to change things up, and there is no shortage of stuff to see and do in Bermuda!

One thought on “Visiting Bermuda – Day 1”