A recap of our amazing trip in search of the northern lights! 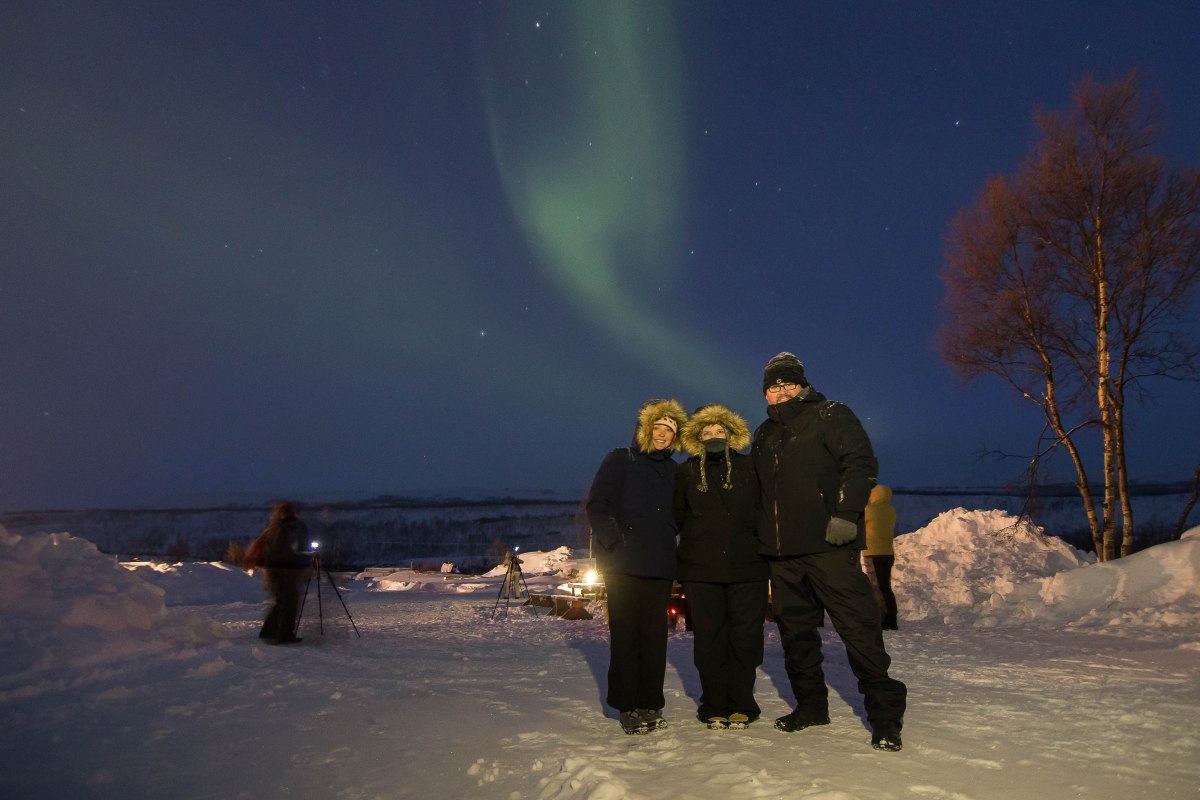 On the bus ride back from the reindeer encounter, we started talking about what to do the rest of the day. We knew that if we were going to see the northern lights, this night would be our only shot, as we were headed to Trondheim the following afternoon, which would put us too far south. While discussing it, the woman sitting in front of us mentioned she’d done a northern lights tour the night before with Tromsø Safari (the same tour company we were looking at), and absolutely loved it. We’d also heard that one of the owners of the company was on-board our bus, so after we got off the bus, we decided to walk over and talk to him. We mentioned this was our last night in Tromsø, and he agreed, based on the rest of our itinerary, this would likely be our last shot to see them. Looking at the weather, which was pretty overcast and snowy, he also indicated that we were looking at a 30% chance that night at best. We decided to at least try, as we didn’t come all that way to give up!

After we finished talking to him, we headed in to the Radisson Blu to book our tour, as Tromsø Safari has a small booth on the left hand side of the lobby. They have a couple different options for northern lights tours that we were interested in, one being a minibus tour where you stay on the bus and they basically drive around various areas that give the best chance of seeing the lights based on weather reports, or a base camp tour, where they choose from one of their 5 different base camps based on the same weather forecasting. Turned out, the minibus tour was full, so we signed up for the base camp tour. They already knew which one they were heading to, a camp near the Finnish border in Helligskogen, which was a couple of hours away. You can see all of their base camp locations on this map, with the one we went to circled in red down in the bottom right. With Tromsø closer to the center of the image (in the yellow box), you can see how far we were going to be going chasing these things! 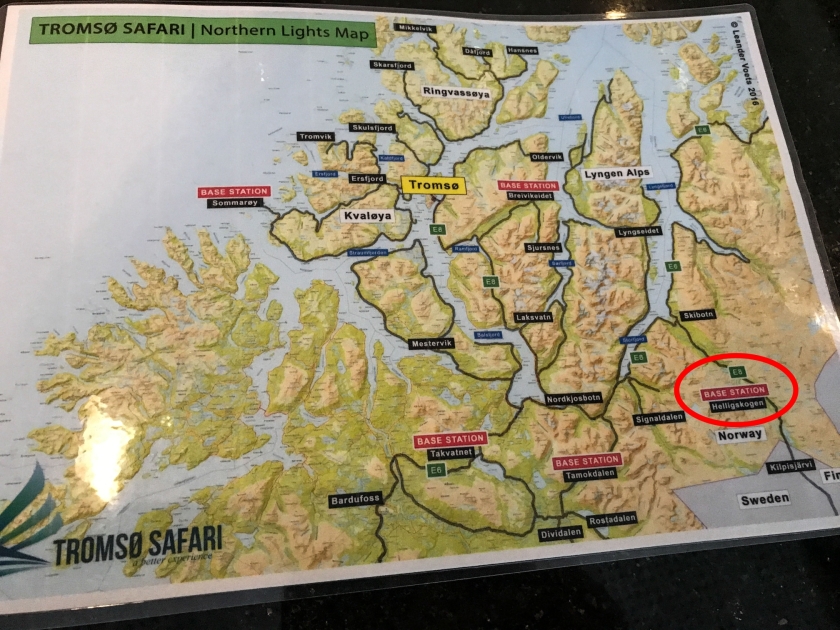 We weren’t slated to meet up for the tour until late in the afternoon, so we headed back to the hotel to rest after doing a little shopping. After that needed rest period, we headed back towards the Radisson and grabbed a late lunch / early dinner at Pastafabrikken AS, just around the corner from where we were meeting for the tour. That lasagna was delicious! 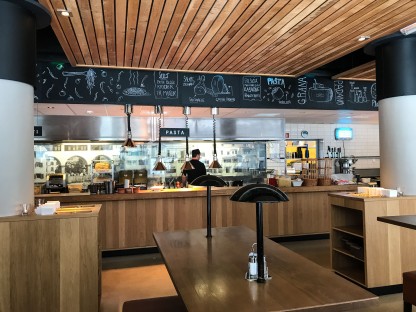 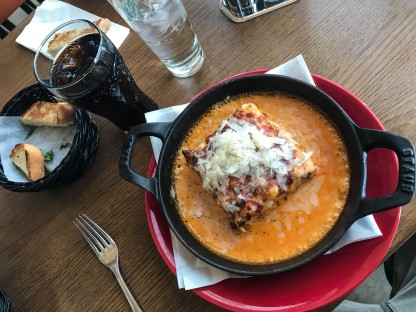 At around 6:30, we arrived back at the Radisson and met up with our guide, Leander. The woman we spoke to on the bus earlier in the day had Leander as her guide and raved about him, so we were excited. After getting everyone on the bus, he explained that their weather forecasting predicted our best chance was at the Helligskogen base camp, and that we’d have a 2-2.5 hour drive out, with one snack/bathroom stop along the way. The drive was incredibly scenic while there was still light out, and even from a moving bus I was able to get some decent shots: 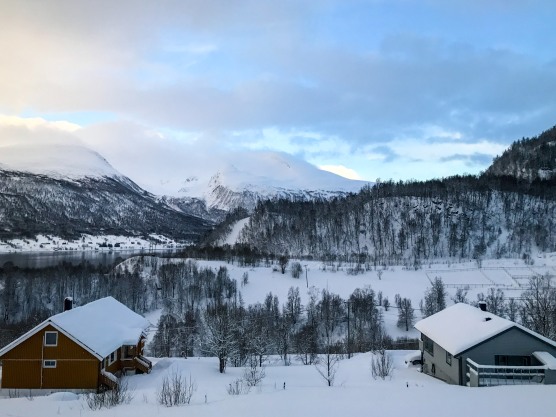 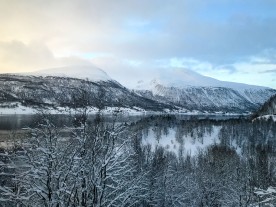 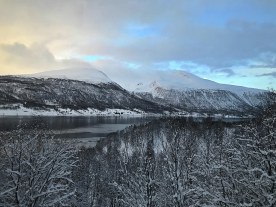 Upon arriving at the base camp, we all headed inside for a quick explanation of how things would go. Basically, we had the option of standing outside and watching for the lights to appear, or we could relax inside while waiting. For those who paid to add it on, dinner was provided. For those of us who didn’t there were some light snacks and drinks. Leander also walked around helping those with cameras set them up to successfully capture the lights, explaining the changes he was making as he did it. They also provide tripods, which was nice, as it meant I didn’t have to lug my tripod on the bus with us. I’d also left my DSLR in the hotel, which a part of me regrets, as it would have been fun to try and get some solid shots with it. Based on the low chance of seeing the lights, and knowing our guide would also take pictures of any lights that did appear, I decided against the extra weight. I did end up using a tripod with my iPhone to at least try and get some pictures, however. I’d downloaded a couple of apps prior to travelling to Norway, sticking with NightCap Pro to shoot with at base camp. I got it set up, attached to the tripod (using my Shoulderpod S1), and headed outside to wait for the show. We didn’t have to wait long 🙂

Leander had warned us all along that the low cloud cover that was over the entire area meant we didn’t have the best chance to see the lights, but he was also in touch with the mini-bus to check their progress in case they spotted them. If they did, we’d have the option to hop on the bus and head in that direction. Fortunately, it never came to that. A handful of us had been wandering around outside when the clouds parted and suddenly we saw them! A very dull greenish-grey streak suddenly appeared overhead and kept getting slightly stronger. The northern lights!

I should pause here and mention one thing to anybody that hasn’t seen them in person before: the vibrant colors you see in pictures of the lights are accomplished via outstanding photography and post processing. In person, at least from what I’ve read and now seen, the lights are fairly dull in color and tend to be more grey. As an example, here’s one of my relatively unedited pictures from NightCap Pro (noise reduction applied, no other edits)

After I took a few shots in different places, Leander was set up to take pictures of anyone who wanted a shot with his camera. We jumped at the chance and got a couple of family shots, along with a solo of Bayley. One really awesome thing about Tromsø Safari’s tour is that they don’t charge extra for the pictures your guide takes, so we have all of the full resolution images Leander shot while we were there. Take a look, he did amazing work! 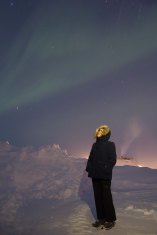 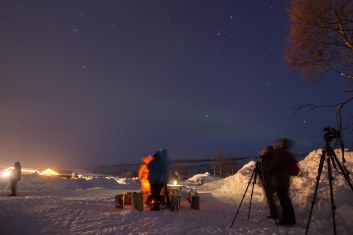 The lights hung around for 15-20 minutes, shifting location the whole time. After they disappeared, we hung around for another 20min or so hoping they’d come back, but no such luck. Frankly, considering the weather in the time leading up to our tour, I feel lucky that we got to see them at all. Regardless, that was about the time we had to head back to Tromsø, so we all gathered up our stuff and hopped on the bus for the long ride back.

We absolutely loved our tour with Tromsø Safari, and would recommend them to anyone visiting the area who’s in search of the northern lights, you won’t be disappointed!