As I mentioned in my last post, we made what was a last minute decision to debark the ship Monday night, only one day into the sailing. This meant the next four days were going to be completely different than originally scheduled, with most of the planning happening on the fly. I’d booked our various hotels and flights the night before, so we knew what towns we’d be in and where we’d be staying, but had little else in the way of an idea of what we wanted to do. Fortunately, Jen had heard about an excursion company in Tromsø, Tromsø Arctic Reindeer, so she’d emailed them a few hours before we go off the ship Monday night to check on availability for their reindeer excursion. They were extremely fast to respond, so even before we got off the ship Monday night and walked to the hotel, she’d booked us on their morning trip to the reindeer camp.

On Tuesday morning we got up, got ready, and headed out for a quick snack before the tour. We found an awesome little cafe around the corner from our hotel, Lugar 34. If you’re looking for a small cafe to grab a quick bite to eat in, I highly recommend it. Friendly staff, good food, and delicious hot chocolate!

After arriving at the designated meeting spot for the tour, the Radisson Blu, we hopped on the bus and headed for the reindeer! The camp itself is maintained by a Sami family who herd the reindeer onto their property in late fall in an effort to protect them over winter. Generally they release them back into the mountains in mid-April, so we were arriving near the end of the season. As our bus pulled up to their compound, it was snowing pretty hard, but that wasn’t deterring anyone in the group. We headed into the main lavuu (Sami tent) to get introduced to our Sami hosts, and receive more info on what the program’s schedule was.

First up was some Reindeer feeding. Even having done this on a smaller scale at the SnowHotel, we were unprepared for just how fun this would be. Upon entering the field where they lived, we were handed large buckets of food, which the reindeer were obviously used to, so groups of them started heading for us right away, looking to fill their bellies. We all sort of scattered around the large enclosure, with groups of reindeer heading for different guests. 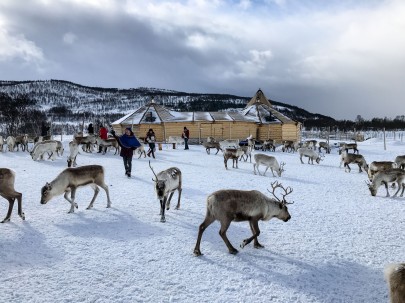 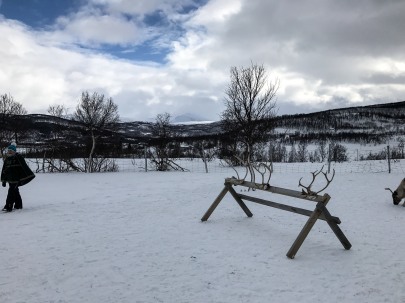 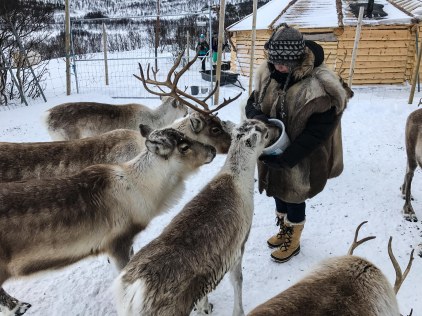 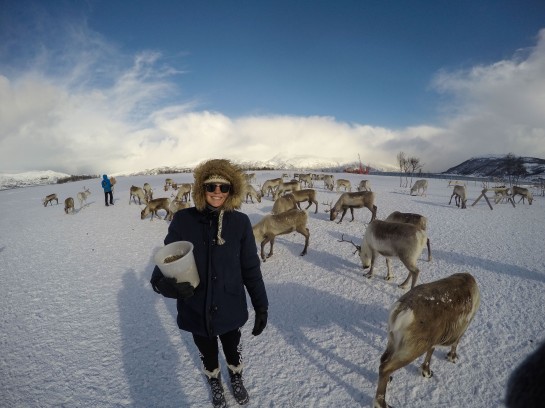 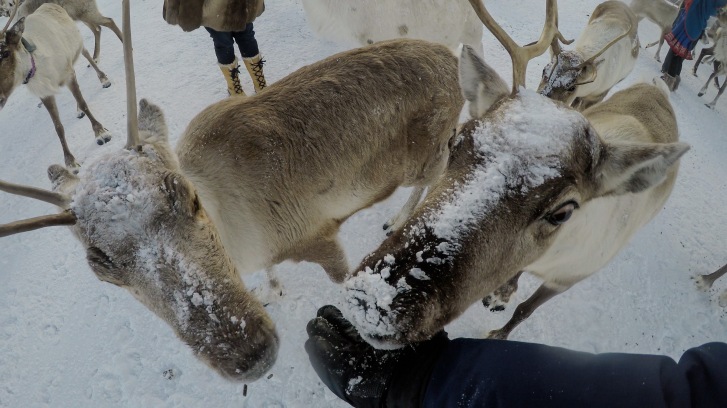 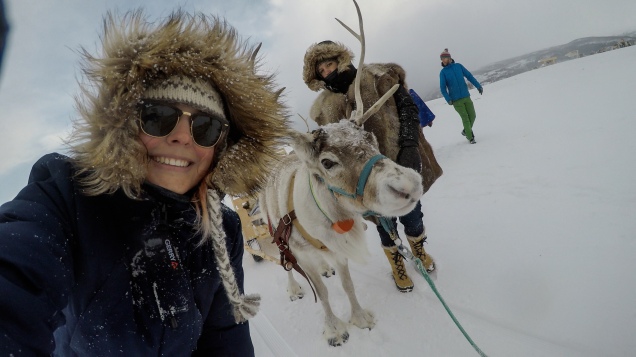 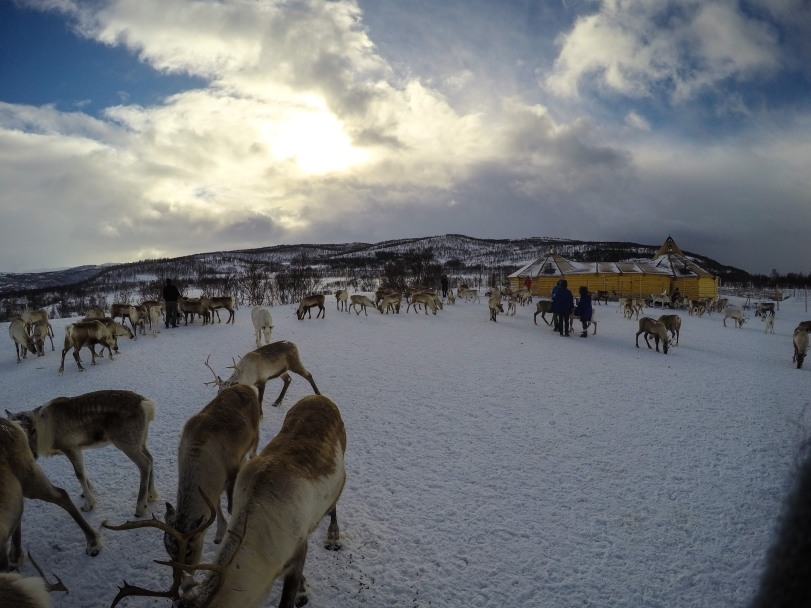 While you’re feeding them, you also have the opportunity to practice lassoing reindeer as well. In reality, you’re practicing on a wooden setup, not actual reindeer, at least that’s what was supposed to happen :). One woman who wanted to try it threw the rope a little too far and actually got one of the reindeer trapped in the lasso. It took a couple of minutes to get the animal calmed down enough to get the rope off of her, but in the end she was fine, just a little scared. I have to admit it was a little funny to see it all unfold, but I know the woman who threw the rope felt horrible.

Our little lassoing adventure over, it was time for the reindeer sledding. As we got set to go, the clouds moved in and started dumping snow on us. It was pretty cold, and visibility was next to nothing, but it was an absolute blast! There were 3 or 4 sleds in our group, with a reindeer pulling each one, and one of the Sami guides leading the way as they took us in a loop around the property. With the sleds being so close, I even had some visits from the reindeer towing the sled behind me! 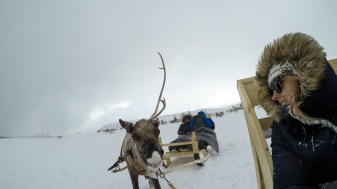 After we finished our loop on the sleds, it was time to head in to the gamme for a treat. Our hosts had prepared some reindeer stew for us, along with a selection of warm drinks; coffee, tea, and hot chocolate. Bayley was a bit conflicted about eating reindeer meat after having just had the opportunity to give them some love, but we all ate up. I have to say, I normally decline stew, as I’m not really a fan of the texture of stew meat, but this was absolutely delicious. Pretty sure I ate every drop of mine! 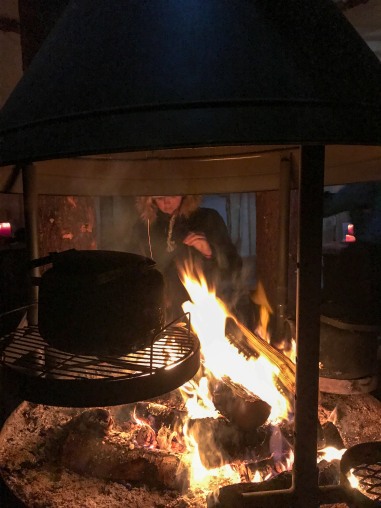 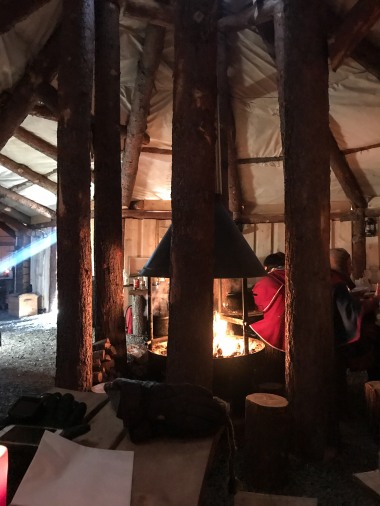 After our snack, we had time for a little more feeding, and headed back out into the enclosure to play with the reindeer. We probably spent another 20 minutes or so out there before heading to the last activity, which was an introduction to the Sami culture from one of our hosts inside the main lavuu. He gave us a good long talk on the history of the Sami people, how they came to heard reindeer, the various aspects of their clothing, and even included a joik performance (traditional Sami folk song)! 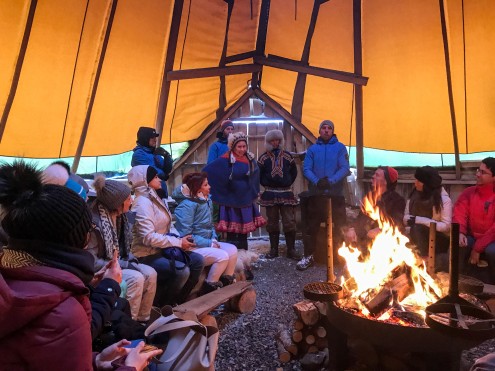 Following our talk on Sami culture, it was time to head out. On the way, Bayley stopped to take a picture with one of the reindeer who had pulled our sled, complete with one of the articles of Sami clothing! 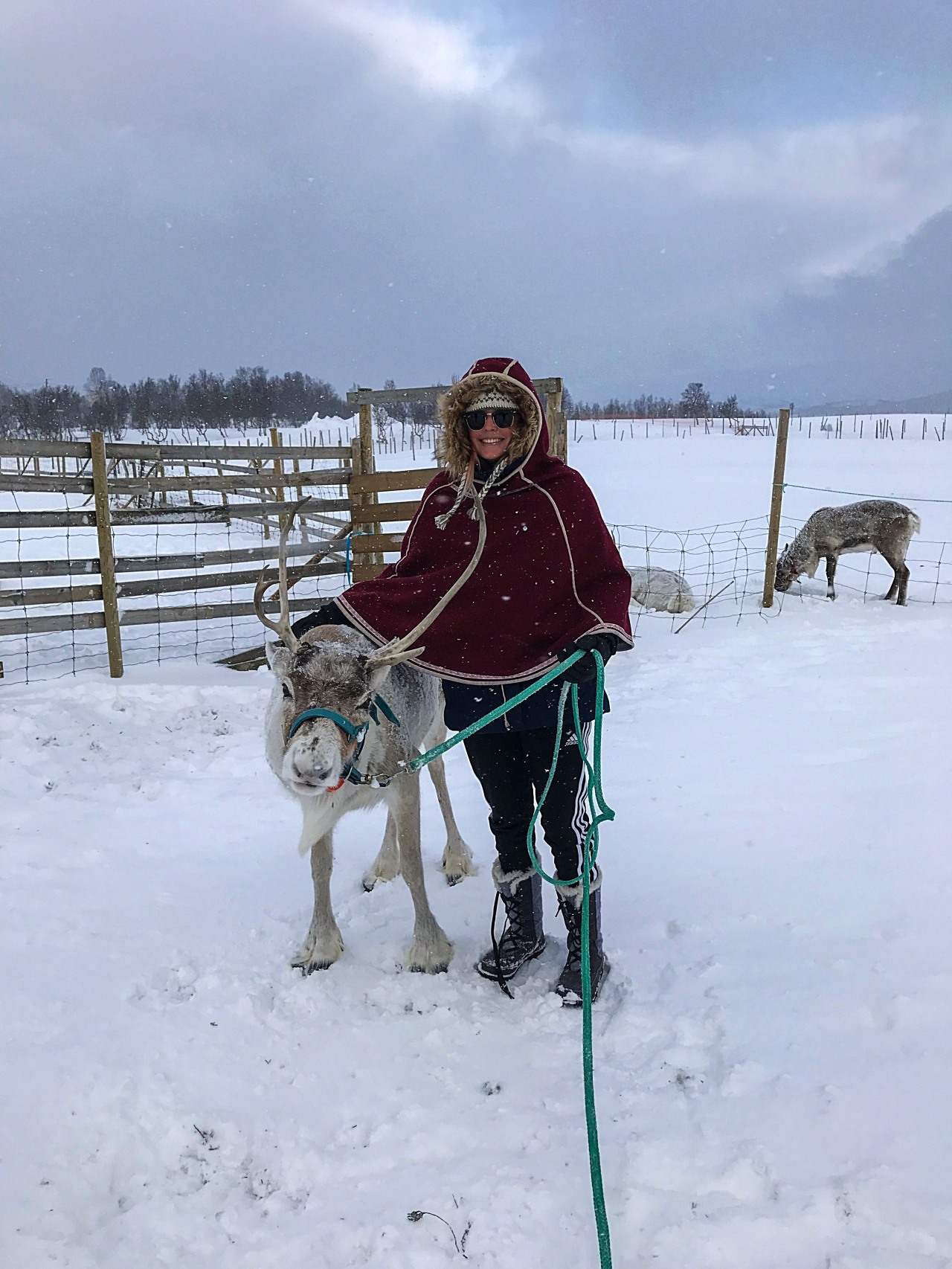 Our time at the Sami camp over, we all hopped on the bus for the 25 minute ride back to the Radisson. With big smiles on our faces, we all agreed that the decision to abandon ship and end our Hurtigruten sailing one day in was a good one. We highly recommend Tromsø Arctic Reindeer, as this is one of the best excursions we’ve ever done. We loved the staff, we loved our Sami hosts, and we’d do it again in a heartbeat! If you’re in Tromsø during reindeer herding season, look them up, you won’t be disappointed!

Next up, our unforgettable adventure in search of the Northern Lights!