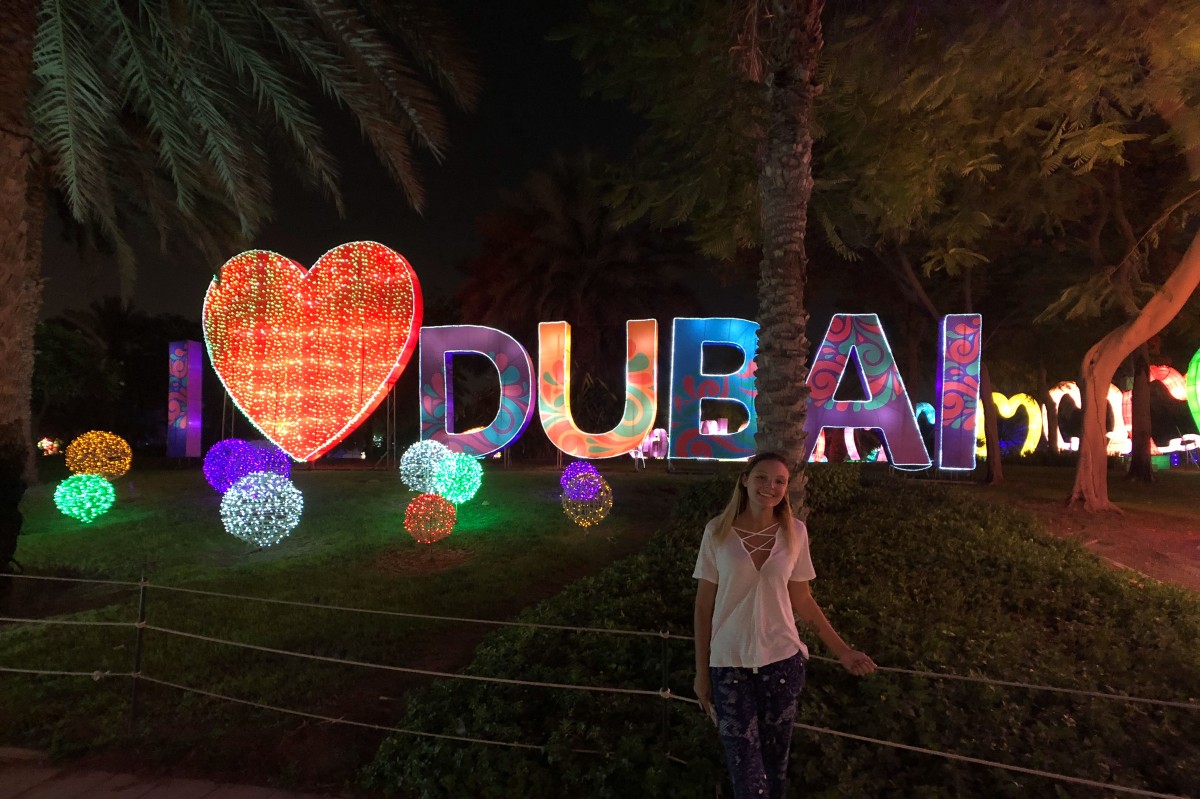 We only had one scheduled tour planned, the At The Top tour of the Burj Khalifa at 5pm, so for the rest of the day we went off of recommendations made by Sunil during our city tour. The plan was to start the day with the Jumiera Mosque tour at 10am. I mentioned this on page 1 along with including the pictures, so I won’t rehash it, but it’s definitely an interesting experience and the people involved could not have been nicer. Considering how rare it is for a mosque to allow in non-Muslims (this is the only one in Dubai, for example), this is definitely a recommended stop.

Next up was the Dubai Frame, or so we thought. Note to self: When visiting the middle east during Ramadan, check to see if schedules for anything like this are impacted. After arriving around 11:30, getting out of our cab and heading to the ticket booth, we discovered that they weren’t opening until 1pm during Ramadan. Oops. It was way too hot to be hanging out for an hour and a half, so we walked completely around the outside of the park heading for the metro station a mile away. We did stop along the way for a shot with the frame, so we did get to see it, just not from inside the park. Oh well!

After a fairly hot walk to the metro, we bought round trip tickets to Ibn Batutta mall, which Sunil said had some cool architecture inside. Tip here: Pay the extra buck and get the gold passes for the metro. It gives you access to the front car, which can be less crowded than the standard cars. We had a pretty long ride, so it was well worth it. Along the way, we passed by a lot of skyscrapers, and were reminded just how cool Dubai’s architecture is. There’s constant construction going on, with new buildings going up everywhere. Something like 20% of all the cranes in the world are in Dubai, spread out across all the various construction projects!

Arriving at the mall, our first goal was food. Sadly, this mall is way outside of the normal touristy areas, and as such a lot of the normal food places in the food court were closed due to the lack of foot traffic, and as a result we ended up having lunch at McDonalds. I can justify Shake Shack in my mind, but wasn’t very happy about eating at Mickey D’s while on vacation.Oh well, we had our food and walked around the mall. Sunil was right, the architecture in here was pretty cool. Each section of the mall is a different theme. Persia, India, China, Tunisia, Egypt and Andalusia are all represented. The fact that we spent a good chunk of our time in Dubai in malls wasn’t lost on me either, but they’re not to be missed, Dubai goes big with malls! Sunil told us there are something like 56 malls in Dubai!

After walking the mall, we began the hourney back to the hotel. I should mention that the metro doesn’t actually go to Ibn Batutta mall yet, a fact we didn’t learn until they kicked us off the train at the last open stop on the way to it. You get something like 3 stops from it, the train makes it final stop, and you have to go hop a bus to the mall. The bus fare is included, but still, that would have been good to know up front instead of being surprised when someone’s coming through the car telling you to get off before you’re ready. Oh well, we made it back just fine with time to clean up before we headed to our final stop.

The entrance for the At The Top experience at the Burj Khalifa is in the Mall of Dubai, so we hopped the hotel’s free shuttle and headed over. On arrival you check in, and are led to a holding area with the rest of the people on your scheduled tour. There are actually two options for this, the regular tour, which goes to floor 125, or the At The Top option (a noticeable price increase) that takes you up to floor 148 first. We chose the latter. If I was going all the way to Dubai, I didn’t see the point in only doing the 125th floor option, who knows if/when we’d make it back there!

After a short history of the building, we hopped in the elevator for the ride up to 148. I have to say that it was the smoothest elevator ride I think I’ve ever had. Even in our hotel, riding up to 61 resulted in some ear popping, but not here. It’s a pretty fast ride, up, but doesn’t feel like it at all, and I don’t remember feeling my ears pop at all. When the doors finally opened, we stepped out into the lounge area. They have seating if you want to hang out inside, as well as a small gift shop. None of that is where I wanted to be, I headed outside for the view. There are heavy glass panels between you and the outside world, but it’s not totally sealed, so you do have the feeling of being outside. The view was amazing, sort of. Being up above all of the other skyscrapers in the city was incredible, but my one disappointment was the haze. I’m not sure if it’s smog or dust blowing around, but the view off in the distance was pretty obscured, making it almost impossible to see out towards the Burj Al Arab, Palm Island, or really out towards the water at all.

After spending some time up there, we headed down to 125. There’s a lot more in the way of consumer’y stuff here, with a big gift shop and some VR machines you can use for an additional fee (we didn’t do this). I wanted to catch the view here, so we headed down the steps to the outside observation area on 124. There’s a huge difference in the view here, and while I was still feeling disappointed by the haze, I was glad we paid extra for the view from 148.

After finishing up, we grabbed an elevator back down and headed into the mall to find someplace to eat. Sunset wasn’t far away, and most of the restaurants were seating in anticipation of the end of the fasting period for the day. We chose a little Italian place named Serafina, located across the pond from the Mall of Dubai. They seated us outside with a view of the fountains, perfect for catching a glimpse of the first water show of the night. Before that, they took our order, but held off on actually bringing us any food or drink until the cannon sounded to signal the end of fasting for the day. Wow was that cannon loud! As soon as it happened, food started pouring out of the kitchen. The reviews for the restaurant were dead on. Really good food, questionable service. Our server was pretty slow with any refills and the check itself, but everything we ate was amazing, including the beef carpaccio and my lasagna. 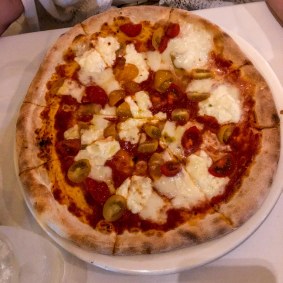 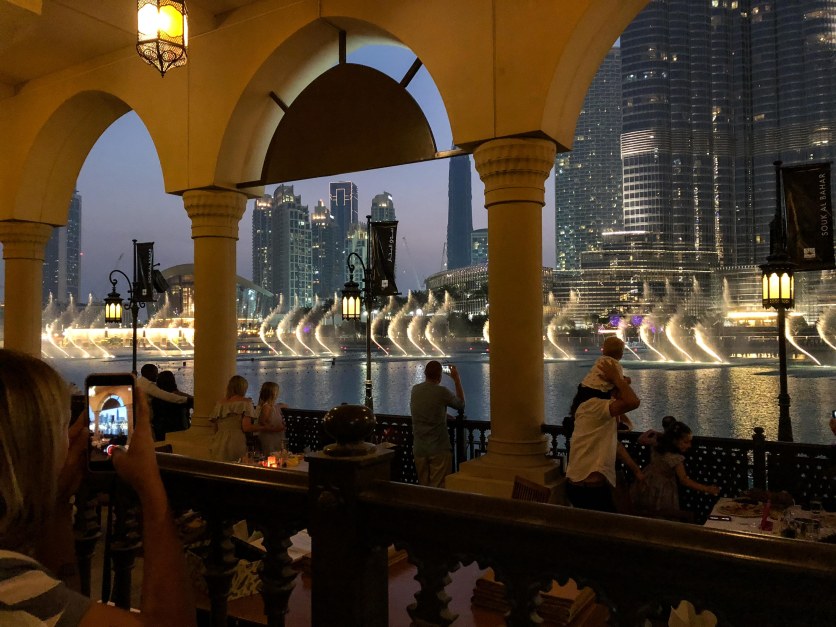 Having watched the first water show during dinner, we decided to step out to the edge of the pond after dinner and catch the second one close up. They happen every 30 minutes, and both of the ones we saw had different music and themes. If you’re at all familiar with the Bellagio’s fountains, this is similar in premise, but larger.

That was it for our final day in Dubai. We’re really glad we decided to add this on to our trip. It just sort of happened in planning, as a beach destination was always the main goal. As I mentioned earlier, I just happened to spot a combined Dubai/Maldives trip when we were planning, and the idea sounded really intriguing. It’s a beautiful city full of really cool architecture, and all of the people we encountered were very friendly. I’d love to come back and check more of the area out again someday! I think the only regret we had is that we didn’t take a trip over to Abu Dhabi for a tour of it one day while we were there. Maybe next time!

That about covers Dubai, next up will be a series of posts about our time in at Vilmendoo Resort in Maldives!