When we first booked this cruise, one of the biggest draws was the “Star Wars Day at Sea” aspect of it. For one day, all of the normal Disney characters get a break, and the ship is transformed into your own floating Star Wars world. We really weren’t sure what to expect, but were excited for the day to come!

SWDAS actually starts the night before when Darth Vader and a few Stormtroopers show up in the lobby warning of the end of the rebellion. It’s a reletively short (but fun) showing that sets the tone for what’s to come the following day:

What do you do when the Empire is hunting for you? Grab a camera and try to blend in, of course! #DisneyFantasy #StarWarsDayatSea

That little show is definitely a good way to get everyone excited for what’s to come the following day. When we returned to our rooms, the Navigator for SWDAS was in our room, and as you can see, there’s plenty to do. We had no shortage of stuff to keep us busy! 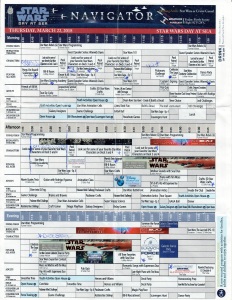 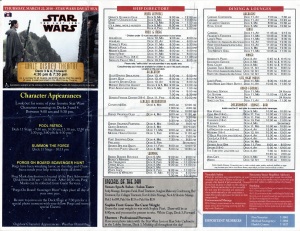 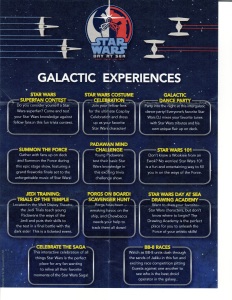 While we enjoy the movies, we’re not really what you’d call Star Wars geeks. That didn’t stop us from taking in as much of the day as possible. Things got kicked off early with a Star Wars themed drawing class where the girls learned to draw a First Order Stormtrooper and BB-8:

They had a blast doing that, and while it was going on, I went for a stroll to see what else was happening. While out walking the lobby area, I ran across these fine (often misunderstood) gentlemen that were out for a stroll, ensuring all passengers were being protected from the rebels:

Ran in to a couple of fellow supporters of the #empire. They were super excited, as you can tell 😁 #disneyfantasy #empiredidnothingwrong

There are no shortage of Star Wars characters walking around all over the place during SWDAS, and we didn’t hesitate to stop them for pictures. They also never break character, which is kinda fun too. In addition to the characters walking around, there are meet and greets with the more popular ones, and even with our late booking, we managed to score tickets to all three of them, as shown in the post below. Click through to that 4th image, too, we managed to get a shot with Boba Fett and his prize!

Good times were had by all on #StarWarsDayatSea. #Chewbacca liked my goatee so much he overlooked my support of the Empire. Not sure what he's got against them, anyway… #theempiredidnothingwrong #disneyfantasy #starwars #thatsnomoon

Moving on, each SWDAS they bring a special guest on for appearances, talks, etc, and ours just happened to be one of the coolest ones they’ve ever had, Warwick Davis! For those who don’t know, he played Wicket the Ewok, as well as holding several other major roles outside of the Star Wars universe. My wife was really excited for this, so after a stroll up on the main deck to see what was happening there, followed by a quick lunch in Royal Court, we headed to the theater for his afternoon talk.

The talk was an hour long, and incredibly interesting. He took us not only through his journey to becoming an Ewok, but also through some of his other films, and his friendships with Val Kilmer and Carrie Fisher. He also dedicated a portion of the talk to a Q&A session where kids could come up and ask him questions. He capped it off by telling us he wanted to try and break the record for number of selfies with him in a 60 second period, so he hurried up and down the aisle on our side of the theater, stopping briefly along the way for selfies. I’m glad we sat where we did, as my daughter was able to get a great selfie with him:

Every #StarWars Day at Sea sailing gets a special guest. I'd say we got the best one with Warwick Davis on ours! Loved his talk today!! #disneyfantasy

If you click through the images above, you’ll see a few shots from the talk, along with a couple of shots of us with him at his signing appearance a couple of hours later. Honestly, he’s a great speaker, and I found his talk to be the most interesting part of the day!

Moving on, one other thing I should bring up before I forget is the SWDAS throw they put on your bed. Also note in this shot that they do something special on the magic porthole for those with inside cabins 🙂

That blue throw at the end of the bed with the SWDAS logo is yours to keep, no additional charge. I bring this up because I know of at least 4-5 people on our sailing who didn’t realize this (it’s not really called out, so I completely understand), and left it behind. Once it’s gone, it’s gone. A couple of people in the Facebook group for our sailing contacted Disney after the fact to see if they could get one shipped since they didn’t realize it was theirs to keep. Unfortunately, Disney doesn’t ship them out, they only make enough for each sailing, so if you leave it behind it’s gone forever, or at least until you sail on SWDAS again!

Star Wars Day at Sea is capped off with a show up on deck, followed by fireworks set to Star Wars music. For those keeping score at home, this means you get two fireworks shows on the SWDAS sailings, once on pirate night, and another on Star Wars night. What could be better? I’ll be honest, the showw itself was just okay. The kids really seemed to enjoy it, but next time I’ll probably do what we did on pirate night and just watch fireworks from up in the Currents Bar area on deck 13 forward, as the seats on the starboard side offer a great view. This is from pirate night just to show the angle:

Anyway, for the Star Wars show, we sat on the pool deck, just about dead center, which offered a decent view of the stage, and a solid view of the fireworks. It’s just super uncomfortable to sit there, and it doesn’t help when people who didn’t get up there early enough to get a good spot show up right as the show is starting and trample you trying to fit them and their kids into spots that don’t exist. Yes, this did happen, and a bunch of us refused to let the parents squeeze their way in after they shoved the kids into a space behind me that didn’t exist. I get it, you want to see the show, but seating is first come first serve, and the deck packs up pretty quick. Plan your time better so you can get there early enough to get a good seat, don’t be rude.

Sorry, got off on a bit of a rant there, so to get things back on track, enjoy the fireworks!

The fireworks don’t end the evening, either, the last Star Wars event of the night is the buffet! On our Dream sailing last year, this happened on pirate night, and we really didn’t take it in since we wanted to catch the showing of Pirates of the Caribbean: Dead Men Tell no Tales right after the fireworks. This time around, I did get to walk around a little more, and we did make ourselves some dessert crepes. The buffet itself has various Star Wars themed items around it, including mini character statues like Darth Vader:

The dark lord of the dessert table 😯 #darthvader #disneyfantasy

After making our crepes, we headed back to the room with them to chow down and get some sleep. We were pretty worn out from the day’s events and wanted to get some rest before Castaway Cay the following day. This visit to their private island was pretty similar to our last one, so I won’t be covering that this time, but just know that we had fun, and still consider it to be one of the best private islands around.

If you’re a Star Wars fan and have the chance, I strongly suggest taking in a SWDAS sailing, you won’t be disappointed! We really enjoyed the day and wouldn’t hesitate to sail again!

Next up: Tomorrow we head to Dubai for a few days followed by a week in the Maldives to celebrate our daughter’s college graduation, so feel free to follow us on Instagram, Facebook, or Twitter and check out all the fun!