Sailing With Disney – Let’s Get This Party Started!

I’ve mentioned before that embarkation day is a love/hate thing for me. Going in to this boarding day, I was excited enough to not care how painful boarding would be, but we still decided that we weren’t going to rush to the port, instead opting for a slightly later arrival in the hopes of avoiding some of the crowds. Well that didn’t really work, as in our excitement we still left a little too early :). Around 11:30, after moving our cars over to the cruise parking area at the hotel we’d stayed at, we grabbed a Lyft and headed to the port. For anyone who’s familiar with the area, it took all of 5 minutes to get from our hotel, the Radisson, to the port. So much for a more relaxed arrival time that would allow us to walk on with little wait!

After passing through security, we headed for check-in. For non-concierge folks, there are two possible lines you end up in, either the first time Disney cruisers line, or the Castaway Club line. Being our first Disney cruise, we obviously landed in the former. It moved pretty quickly, and start to finish I think it might have been 10 minutes before we had our cabin keys are were off to wait for our turn to board. Not too bad! Part of that check-in is getting your boarding group number, which in our case was 25, about 22 from where they currently were. No biggie, we decided to get in line for a picture with Minnie prior to boarding, which definitely killed some time, as they were all the way up to group 17 by the time we finished.

After wandering the boarding area for another 20 minutes, our boarding group was called, and it was time to get things rolling. One of the cool things about boarding on Disney is that as you walk on to the ship, you’re welcomed on board by name:

And we're on! #disneydream #cruise

Once on board, we headed for Royal Palace, as we wanted to try and get reservations for the brunch buffet at Palo, and hadn’t been able to prior to sailing. Having boarded at 12:55, we only had 5 minutes before they opened the room to allow passengers to come in and request dining changes like this, so we jumped in a line that was surprisingly short, with only 5 or so groups in front of us. As you’ll see in a later post, we did manage to get the reservation, so that little victory behind us, we headed to lunch. We’d decided ahead of time to eat our first meal in the Dream in Enchanted Garden to avoid the buffet crowd. Not a bad call, other than somewhat slow service. The dining staff were very friendly and quick to respond to whatever you needed, but it seemed like there were too few of them in a space where there are too many tables crammed around each other. The sundae at the end of the meal made up for it, however. Amazing. That proved to be a common theme on the cruise, as their ice cream is delicious! 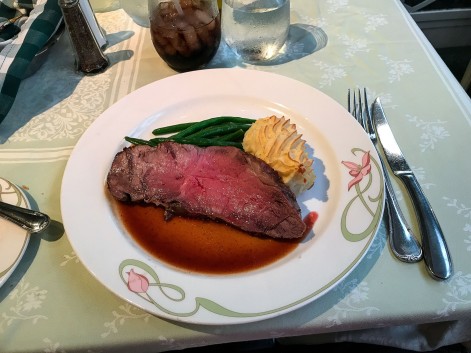 After lunch, we headed to the room. We were booked in cabin 7004, a Deluxe Oceanview Stateroom with Porthole (OV) all the way forward on deck 7. It’s a fairly spacious cabin with plenty of storage with a porthole that overlooks the front of the ship. One thing I really like about the room’s design is the split bathrooms. One bathroom with a sink and toilet, the other with a sink and bathtub/shower combo. Having another bathroom with its own sink separate from the shower allowed more than one person to be getting ready for dinner at the same time. So nice :). My only gripe about the room was the slanted front wall, due to that being the front of the ship. I intentionally chose that side of the bed (power outlet and USB ports in the alarm clock FTW!) and ended up hitting my head more than once. Really, that’s all I’ve got in the complaint department where the room is concerned, I really liked it. Here’s the 360 shot of it, take a look around!

Here are a few more of the room, including the bathrooms, and one of the couch after it’s been turned into a bed: 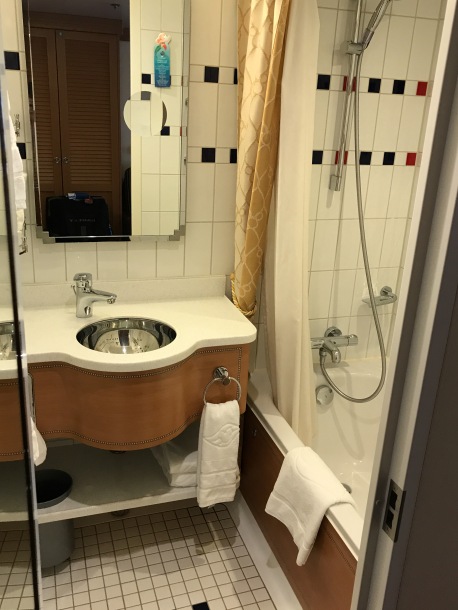 After dropping our stuff in the room, we gave Bayley a tour of the kids club since it would be the only time she’d be able to go in. As expected, Disney’s got a great setup down there. I posted some pics of it during our tour of it back in December, but to recap, some of the highlights include a Star Wars themed section where kids can fly the Millenium Falcon, Andy’s room from Toy Story, and large video enabled floors where games can be held. As we walked through, there was in fact a game going on at one of them, which Jen and Bayley happily took part in. Jen thinks they were frogs, stepping on the screen to throw out its tongue and catch bugs: 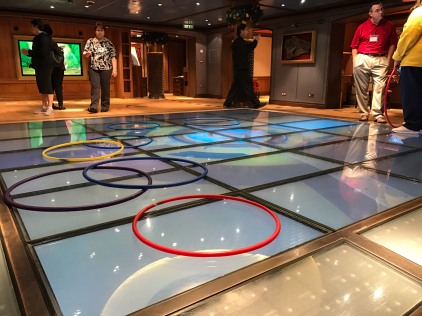 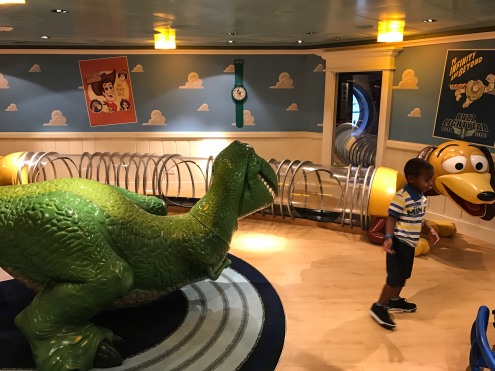 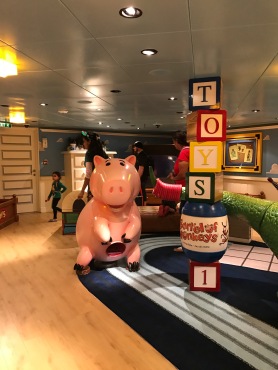 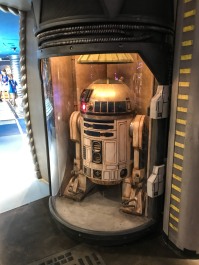 After a little walking tour of a few areas, we headed up to deck 12 to take in the sail-away party. Having mis-judged the number of people who’d be attending, and getting there as it was starting, our initial spots weren’t that great, so I moved around a little to get a better view: 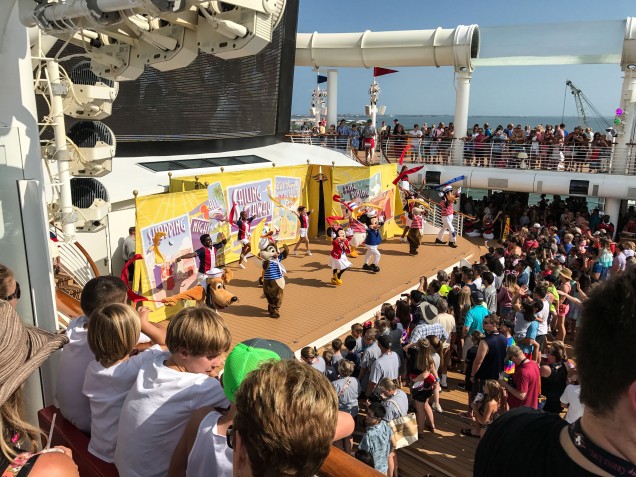 It’s a good time, complete with a number of Disney characters, so if you want a good view, get there a little early and get up against the rails on either side of deck 12, or up front by the stage on deck 11.

After the sail-away party, we explored the ship a little more before heading to the main show. We’d been assigned late dining (8:15), which we normally don’t like (this trip did nothing to change that), so we were in the early show. The first show of the sailing was the Golden Mickeys, an awards-style show geared towards celebrating Disney’s vast catalog of movies. We do like the Dream’s theater, as it’s fairly open throughout, with excellent sight-lines in most places. They do use the forward balcony boxes in the shows, so the closer to center the better, but we sat on the sides a couple of times and had clean views of the stage itself. Couple that with snack bars just outside the theater by each entrance, and it’s up there as one of my favorite theaters on any ship we’ve sailed. Far better than whatever it is that Carnival decided to do with the main theater in the Vista.

The show is where I really started to appreciate Disney’s ability to provide outstanding entertainment regardless of location. Prior to this, MSC held the title of best entertainment at sea in our eyes, but Disney’s on a whole other level. For that very reason, I still categorize MSC as the best in the contemporary non-Disney class when it comes to original shows. When you factor in Disney’s vast catalog of movies and cartoons that they can pull from for the show (without having to pay royalties), there’s really no way for anyone else to compete, as Disney’s in a league of their own. The show itself was outstanding, with excellent performers and vocalists, a theme that held true all week.

The theater is also where I started to notice and appreciate Disney’s enforcement of the rules. Leading in to the show, they’d warned people multiple times that no photos or video recording were allowed in the shows, and as usual, people didn’t listen. What set them apart from other lines is that they actively enforced it. In Cats when we were on the Oasis of the Seas, a woman a few seats over recorded a large chunk of it fairly obviously (the screen on her phone was large and bright), and none of the staff members did a thing even though we were all warned before the show about doing just that. In here, the ushers quickly spotted those with even the dimmest screen, walked over, and told them to stop. It made for a much more enjoyable experience. I admit I did take one picture, but well before the show started so I could show our viewing angle: 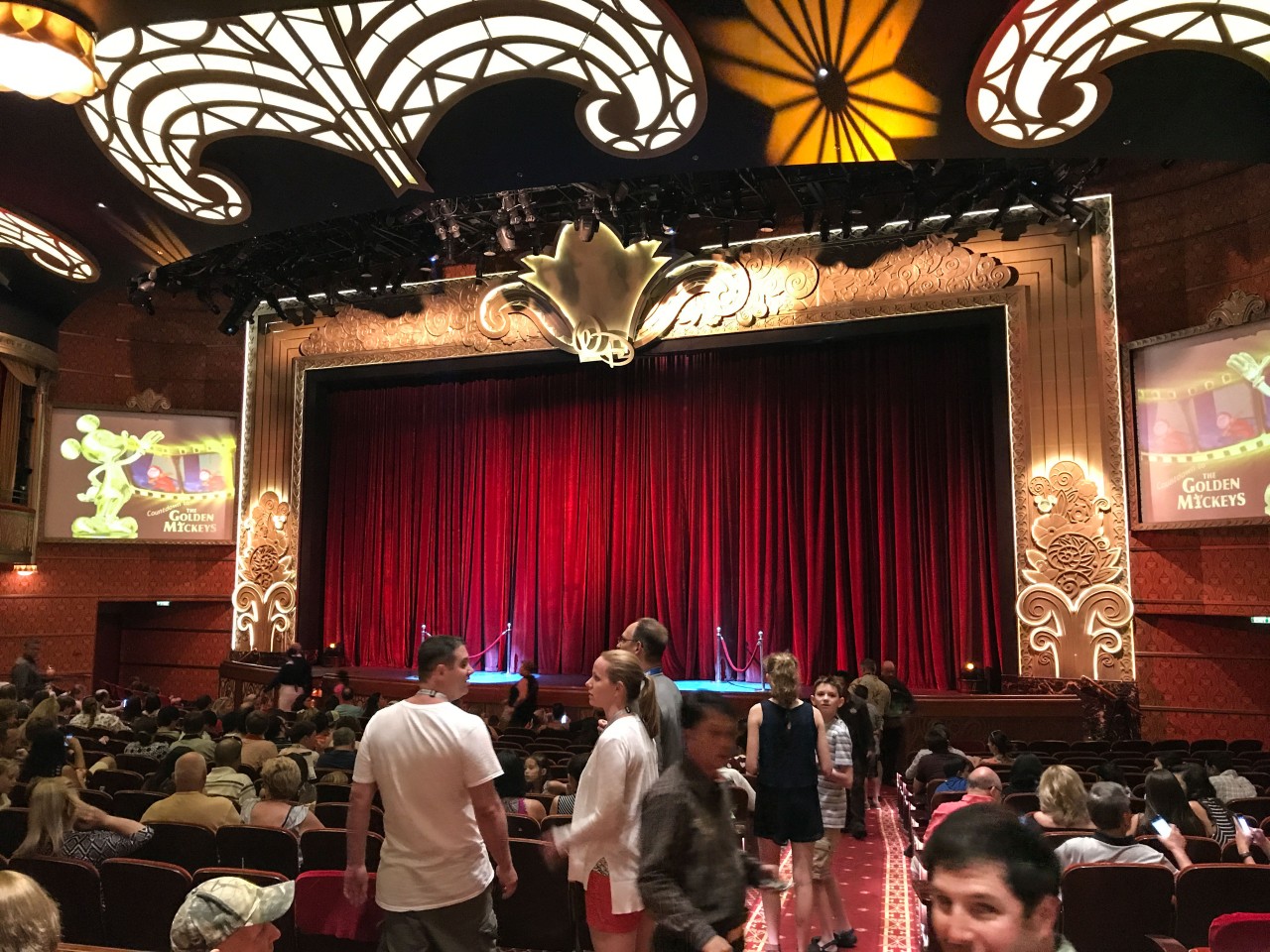 After the show ended, we still had time to kill before our 8:15 dinner seating, so we headed to D Lounge to catch part of the Family Fusion game show. Good stuff, similar to the Match Game. I didn’t stay in there long, I wanted to get some outside shots as the sun was going down, so I headed out to get a few shots while the girls watched the game: 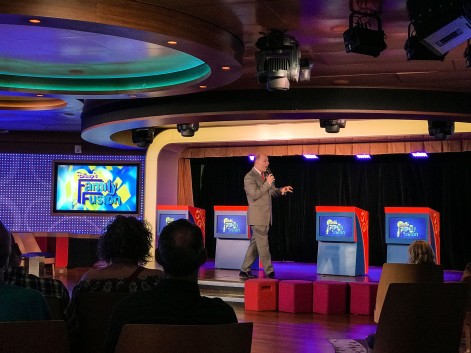 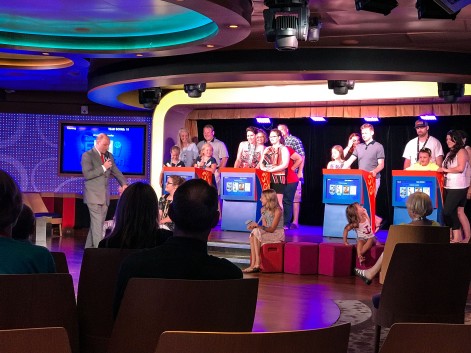 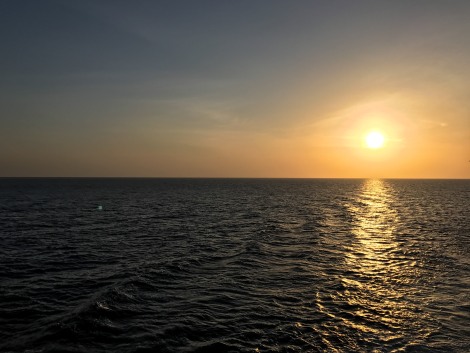 After that quick stroll outside, I headed back in to meet up with the girls so we could head to our dining room for dinner. For those that haven’t sailed Disney, they have multiple dining rooms that you switch between each night, with your dining staff following you. For night #1, Animators Palate was on tap. That’s a really fun venue, and probably our favorite MDR of the sailing. Being that we had 4 nights in 3 dining rooms, one was repeated, and I really wish it had been this one. Beyond the cool decor, Crush is jumping between the different screens talking to various guests at their tables while they eat. If you’ve ever been to Turtle Talk with Crush at Epcot, it’s very similar, just in a dinner setting. 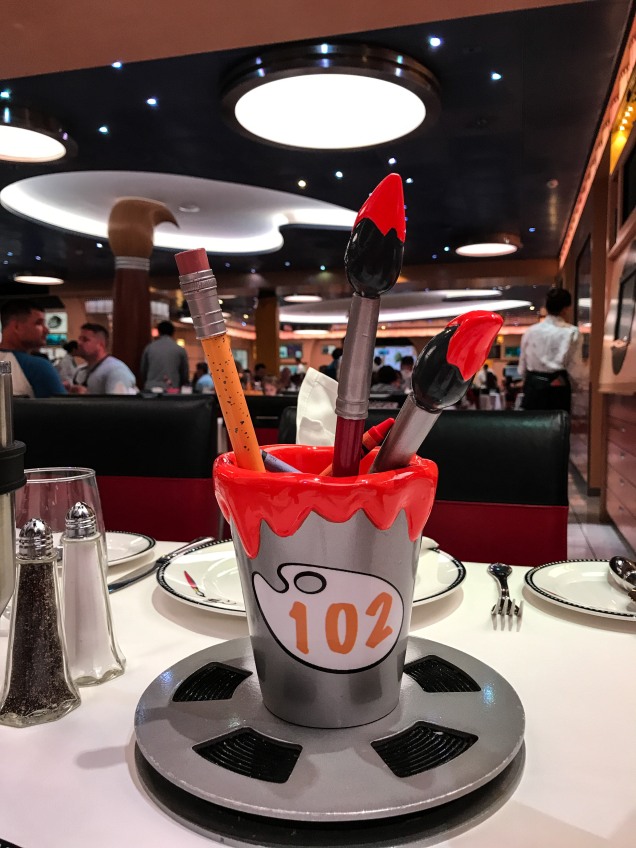 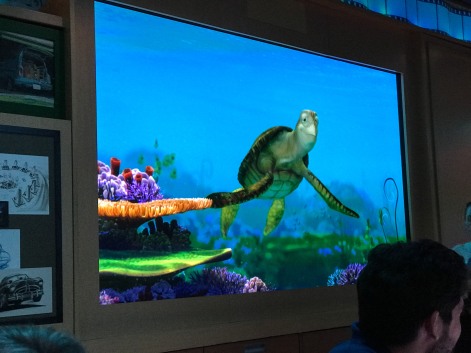 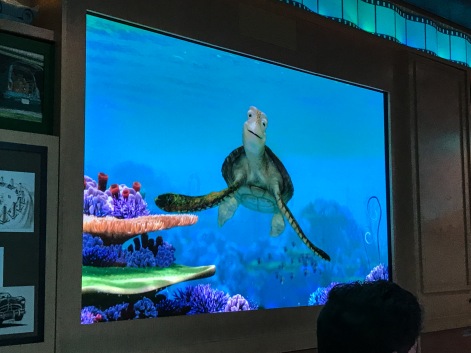 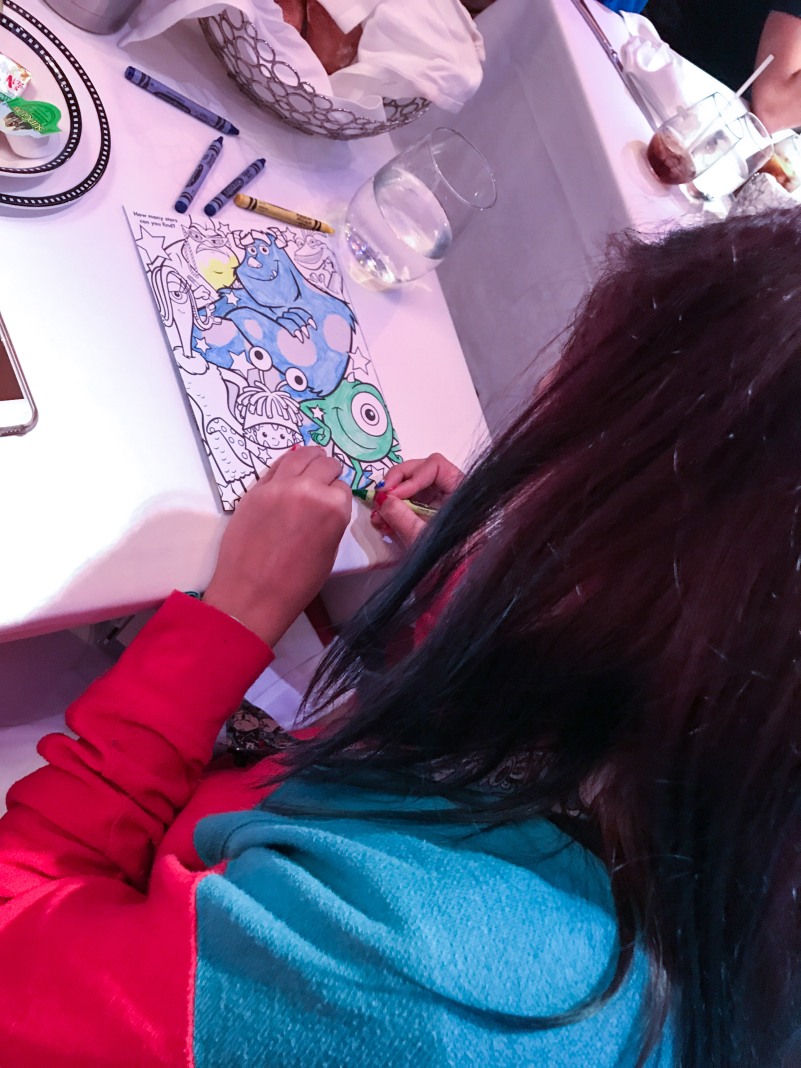 Dinner itself was delicious. From the top left, moving clockwise, I had the Black Truffle Pasta Purseittes, Baked Potato and Cheddar Cheese Soup, Ginger Teriaki dusted Angus Beef Tenderloin, and the Cookies and Cream Sundae. Like the sundae at lunch, it was outstanding. I could have eaten sundaes all week and been perfectly happy :). 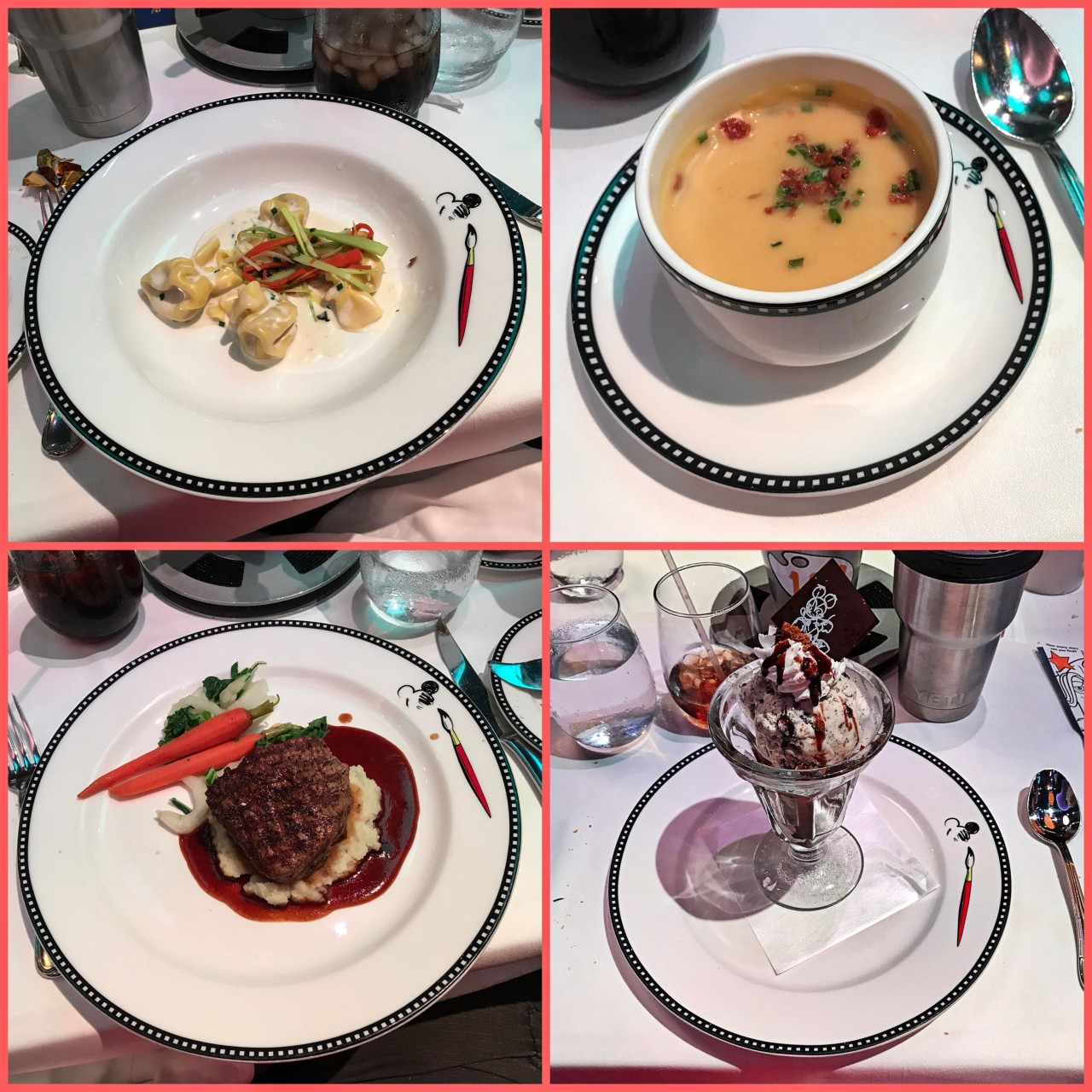 Our only complaint with dinner was how long it took. Felt like we were never going to get out of there, taking just over 2 hours from the time we were seated until we were done with dessert. One of the reasons we prefer early dining is that they actually have a set schedule to keep, needing to get people out quickly so they can clean up for the next seating, a deadline that’s just not there with late seating. Our wait staff was great, it just seemed like another case of too many tables for too few staff. It took so long that we missed one activity that started around 10pm or so. Might have been a character meet and greet, but I forgot to note it unfortunately.

Our dinner finally over, we headed to the Quest game show, which was followed by their version of the marriage show. Normally we like to play along during Quest, but getting there so late and being completely full from dinner, I really wasn’t up for it. There weren’t any really convenient seats for running up to the host, either, so we just watched this round. The host for both of these events, Chris, was outstanding. I highly recommend attending the late night stuff he hosts if you’re looking for fun without the kids :). In case anyone from our sailing happens to read this, I’ll close this post out with some shots from those games, including a picture of the marriage show couples. Couple #1 was one of the funniest pairs I’ve ever seen in this type of show, for reasons that should stay on the ship 😉 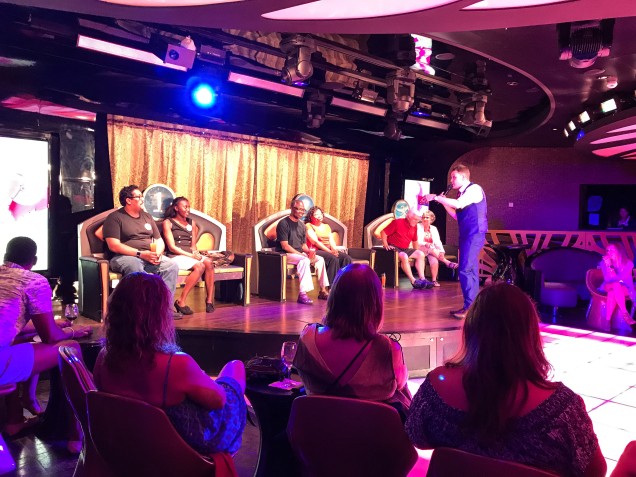 At this point we’d only been on-board for half a day, but were having an absolute blast, and for the most part our Disney cruise was living up to the hype. Next up, the ship makes its first stop. Did we get off in Nassau? Stay tuned! In the meantime, enjoy a few more pics from day 1: 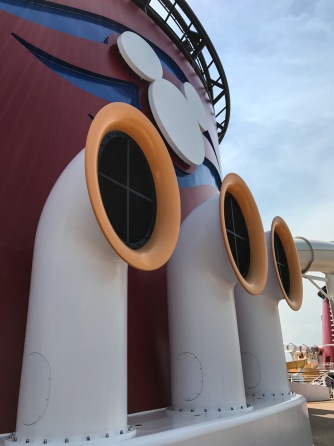 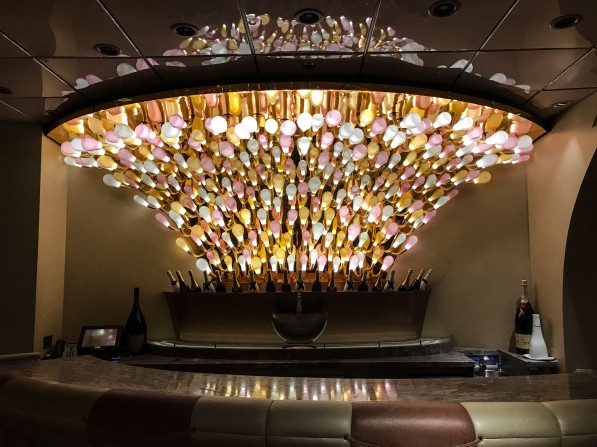 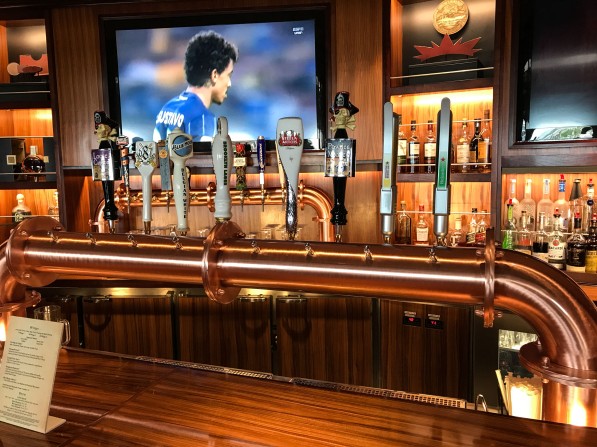