I’m a bit late getting this done, but I wanted to get one last post in from our trip to talk about some of the things we hadn’t done on previous visits to Disney. The entire trip was a blast as usual, but a couple of the items below really helped make it even more memorable.

This is the first time we’ve done more than 5 consecutive days at Disney, and going in I was sure I was going to be sick of the parks half way through the trip, but can admit now that I was dead wrong. Normally we feel like we have to get everything done at whichever park we’re visiting the day we choose to be there, but having so many days on our hands, there was never any pressure to rush through the parks like we normally would. We went with a much more relaxed schedule where we’d head to a park whenever everyone work up, ride some rides, maybe head back to the hotel for a while, and later on either head back to that park, another one, or in a couple of cases to Downtown Disney for the rest of the evening. We had a general idea of which park(s) we wanted to visit every day based on the crowd calendar at EasyWDW.com, which we found to be pretty accurate. We did deviate from our plan a few times, but that was the nice thing about having so many days, as we felt like we had more flexibility in the schedule. If we had the time and extra money, it’s a pass we’d buy again.

We did make use of the ‘water parks fun & more’ option on our tickets, too, using them to gain entrance into DisneyQuest for a few hours the last Saturday we were there, before heading back to Hollywood Studios for one last park stint. For a Saturday, DisneyQuest seemed empty. I ended up sitting and relaxing most of the time we were there, as I wasn’t feeling that great (the heat was finally getting to me), but the kids had a blast.

Star Wars Weekends are something they only do from mid-May through mid-June if I recall, and it was kinda cool. In addition to the existing Star Wars stuff they have at DHS (Star Tours, Jedi Academy, etc), they have a lot of characters on hand for autographs and pictures, and even some special celebrity appearances. We didn’t partake in the celebrity appearances, so I can’t really comment on what it entails, or how you get access to it. The characters were aplenty, though. Just about everywhere we went there were lines for various characters. Chewbacca, Luke, Lea, Boba Fett, Stormtroopers, and many, many more. It wasn’t just the kids who were in line either, there were plenty of adults, in some cases sporting Star Wars shirts, replica helmets they wanted signed, and a lot more. No judgement here, I have no leg to stand on, as I’m known to frequent autograph lines at races we attend :). Bayley got in on it too, taking pictures with a couple of characters. She was all too happy to wait 45min to get a shot with Chewbacca: 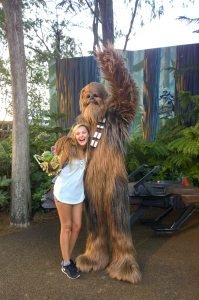 One of the coolest things about Star Wars Weekends were the fireworks. They have a special ‘Symphony in the Stars’ fireworks show at 9:45pm each night of Star Wars Weekends with the fireworks shooting off to music from the movies. It was one of the best fireworks shows I’ve ever seen, to be honest. I have a few clips of it, but they’re nowhere near as good as the multi-angle video of the show that the WDWMagic guys have on their site. If you’re a fan, I highly recommend sitting through the whole 6+ minutes. Better than the nightly fireworks at Magic Kingdom, in my opinion.

On May 22nd, the Magic Kingdom was open from 6am Friday to 6am Saturday to kick off the summer, using a Frozen-based theme of ‘Coolest Summer Ever’. We’d initially planned to be heading home that day, but once my wife saw this was happening, we pushed our 7 days at Port Orleans back to accommodate. We really didn’t see much in the way of promotion anywhere for this, as Disney seemed to be more interested in publicizing the 24 hour event going on at the same time at Disneyland, since that park was kicking off its diamond celebration with the 24 hour event. That lack of promotion was quite evident when we arrived on Friday morning for the opening of the park, too. We got there around 5:40am to be there and see the rope drop, and had no problems finding a good spot to watch the festivities.

Once the rope dropped, we headed into the park. We initially headed for the Snow White mine train ride, but seeing that a long line had already formed there, we headed to Tomorrowland. The lack of crowd that early in the morning was evident here, as we were able to ride Buzz Lightyear a couple of times right away with no wait while the kids did Space Mountain twice, followed by a couple of rides in Adventureland, all before 7am. The park really didn’t start to fill up until 9ish, the normal opening time. The place really did fill up, too, with Friday being the busiest day we saw at any park during our trip. An employee we talked to the next day at Hollywood Studios said he heard Magic Kingdom hit a peak of 84,000 visitors at some point during the event. In a couple of the shots below you’ll see quite the crowd at different points in the day. Sorry a couple are blurry, I wasn’t going to stop in front of a large crowd and get run down 🙂

I’ll be honest, we didn’t stay the whole time. About 4pm Friday afternoon we headed back to the hotel to rest for a bit and freshen up. After that, we headed over to the Contemporary early in the evening for dinner before heading back in to the park. I expected we’d see people start to trickle out of the park after the evening fireworks show, but even with the normal mass-exodus that clogged up main street after that, the park was still pretty full all night.

Side note here – we got stuck in the main street crowd after the fireworks show (not the first time we’ve made that mistake), and saw some pretty sad behavior out of the supposed grown-ups. I get that people were tired and didn’t want to be stuck there, but intentionally slamming motorized scooters and strollers into people to try and make them move out of your way when they have no where to go is a pretty poor example to be setting. I even heard more than one spouse tell their significant other they were going to do it. Someone near us mentioned witnessing fights breaking out between parents, too. Truly pathetic.

Back on topic, once we were back in, we stayed until about 4am, riding various rides and watching the 1am electric light parade. For our last ride, we finally sucked it up and waited in line for the Snow White mine train. At 70 minutes it was the longest line we stood in all week, but we were glad we waited, as it was a really fun ride. All in all, the 24 hour celebration event was a blast, definitely something we’d do again! Here are a few random shots from our time at the park that day. 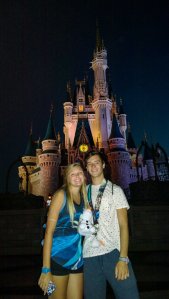 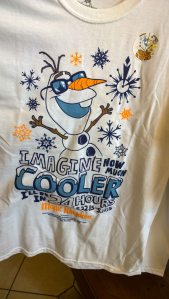 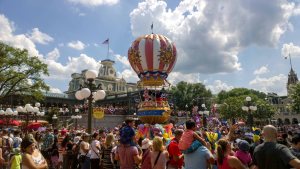 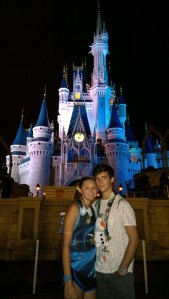