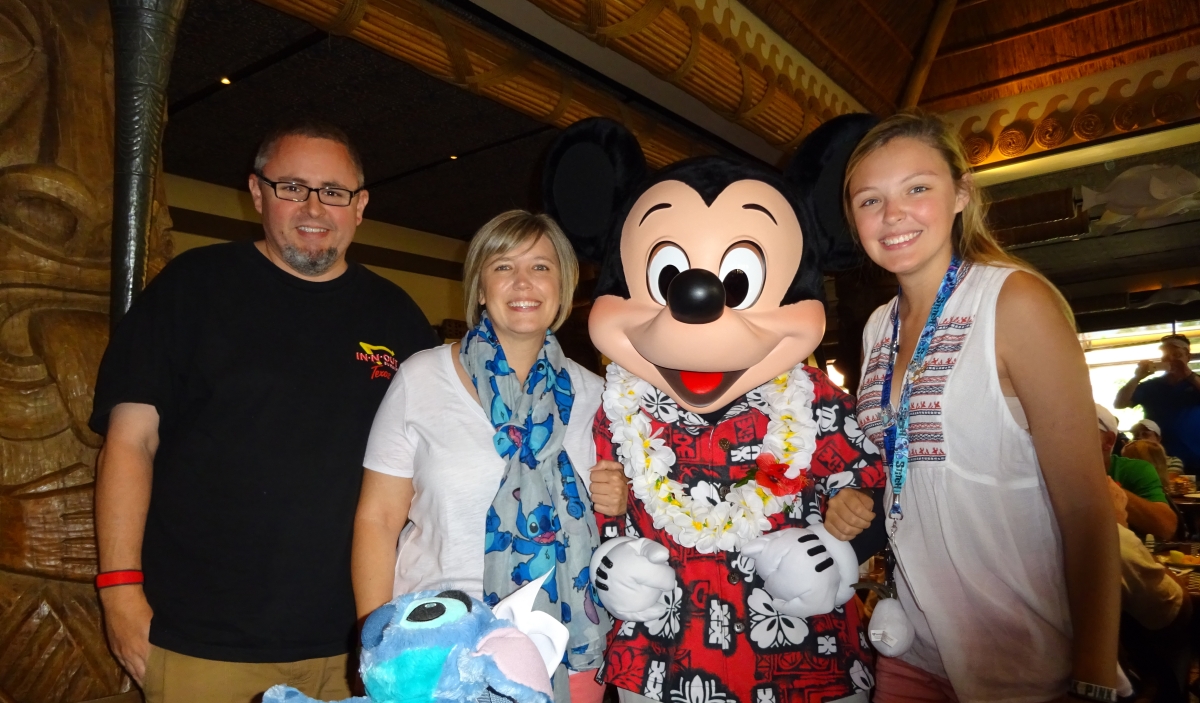 Jen’s birthday fell pretty early on in our trip to Disney, so we left the decision on where to hold her birthday dinner up to her. She’d decided she wanted to do a character meal, and after a bit of a hunt on the Disney Dining reservations site, decided on Crystal Palace at Magic Kingdom for a Pooh-inspired dinner, since she’s always loved those characters. At the last minute, we also found an opening for breakfast that same day at Ohana’s Lilo and Stitch character breakfast (Bayley’s always been a huge Stitch fan), meaning we ended up bookending her birthday with two separate character meals. How’d they stack up? Let’s take a look…

As mentioned, this was a last minute reservation made the day before, spurred by my wife noticing an opening for 9:45am that wasn’t available when we’d looked prior. Remember in my last post when I recommended constantly checking the reservations site? That’ll be a recurring theme in this post. If something you want isn’t open, keep checking :). Anyway, we arrived about 30min before our reservation, so we walked around the shops a little. I think we ended up checking in at Ohana’s main desk about 10 minutes before our scheduled reservation, and were seated pretty much on-time, even with the expected large crowd outside the restaurant.

The food itself is pretty standard breakfast fare. Your servers bring plates of scrambled eggs, bacon and sausage, Mickey and Stitch waffles, breads, and a few other things. They’ll bring out more of any of the items, too. Like I said, pretty standard, and nothing special from a taste perspective. Like the other character meals, it’s not about the food, it’s about the characters. Mickey, Pluto, Lilo and Stitch make their way around the restaurant on a well choreographed schedule as you eat, and we had no problem getting time with any of them, even with a packed restaurant and a break for them to lead a parade of kids around the restaurant. One by one, each of the four characters stopped by for some pictures at various points during our meal: 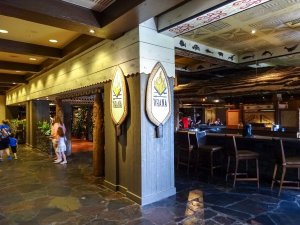 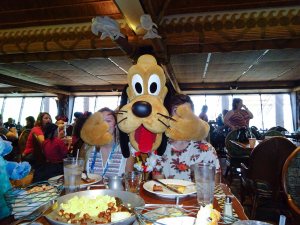 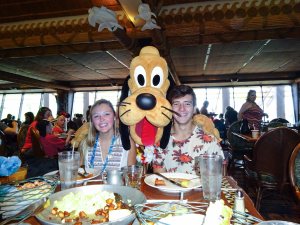 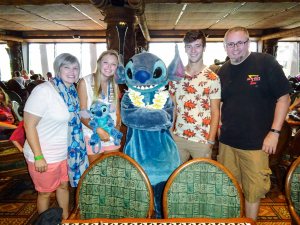 Definitely a fun time, and a good start to Jen’s birthday!

This dinner was initially scheduled for 9:50pm, pretty late by anyone’s standards. When we first started looking a couple of weeks prior to the trip, that was the only time available for a party of 4. We kept checking the site, and were able to move up a few times, eventually ending up with a reservation for 7:45pm. After spending the afternoon at the Magic Kingdom, we headed over to Crystal Palace around 7:30 and were seated pretty much on time.

This restaurant is buffet service, and actually had some pretty good food. The mac and cheese in the kid’s section was pretty good, as were the mashed potatoes and the beef available on the carving station. Going against the diet Jen and I had been on in the weeks leading up to this trip, we both made two (or three in my case) trips up for more food. As we ate, the same well choreographed character visits we’d seen at Ohana were taking place here. Bayley had her selfie-stick with her, so she had fun taking selfies of her and Joe with each of the characters, and we made sure that each knew it was Jen’s birthday so she got a little extra attention. The outstanding service and fun table-side visits from Winnie the Pooh and friends made for a fun birthday, but it wasn’t over just yet.

A few days earlier, Bayley and I had decided to tack on a birthday cake to this dinner, so we’d gone through the process to order one. We did this before Jen and I got down to St Pete to pick up Bayley, so I had Bayley make the call to the folks at WDW Magic Kingdom Cakes (per this site). I was surprised that they didn’t have a way to order online, but even more surprised to find that when Bayley called, she didn’t actually get to talk to anyone. She just left her information and they emailed the info and order form to her. When they did, she forwarded it to me, and after exchanging a bunch of texts with her to figure out what we wanted, I placed the order by filling out the PDF form they’d sent and emailed it to the cake service. For anyone considering ordering one when on property, here’s what they sent me:

The cakes come in 6″, 8″ and 10″ sizes, and while the small would have been more than enough for the 4 of us, it had next to nothing in the way of customization options. No custom text (meaning we couldn’t add her name), and no option to add a character image. We really wanted to do both, as well as mixing it up flavor-wise, so I stepped up to the 8″ chocolate cake with vanilla buttercream icing and dark chocolate mousse filling, with an Olaf image on top. I’d have preferred to get a Pooh character image, but according to the order form, none of them are available for this, which seemed a bit odd. Regardless, I ordered the cake to be included with dinner at Crystal Palace. Not long after we finished visiting the buffet, our waiter brought the cake out, complete with a birthday card for her signed by all 4 Pooh characters. Nice touch! My main disappointment with the cake experience is *how* it was delivered. This isn’t anything against the server, he delivered it and sang happy birthday with us, but even at a regular restaurant in the real world, you usually see multiple employees coming out to deliver the cake and sing. Not here, it was just our server. I completely understand that it’d be logistically impossible to get the 4 characters to all come over for cake delivery, but one of them being there might have been nice, or at least a few more servers. For the money the cakes cost, I think I just expected a little more out of Disney. Oh well, it’s a minor complaint in the grand scheme of things, and the cake itself was excellent! I included both a pic of the whole cake and one showing what the delicious inside looked like. My only other issue is one they warn you of pretty clearly when ordering, they will not store leftovers or send them back to your room for you if you’re staying on property. I knew this going in, and is the reason I took a bus ride back to the room to put the leftover cake in the fridge after dinner. I certainly wasn’t going to waste over half of this cake. As far as my overall satisfaction with the cake service, I’m not sure I’d do it again, especially at a buffet-style restaurant where there are plenty of other desserts, but still enjoyed being able to surprise her with it. How often do you get to spend your birthday at Disney, right?

In the end, we all agree that we liked the dinner at Crystal Palace better, especially from the food aspect. Both were fun though, and just goes to show that you don’t have to be a kid to enjoy a character meal at Disney! 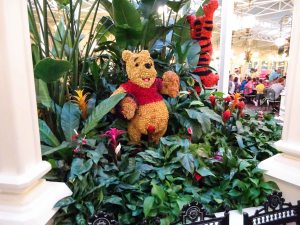 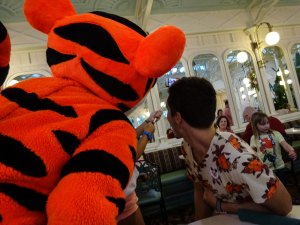 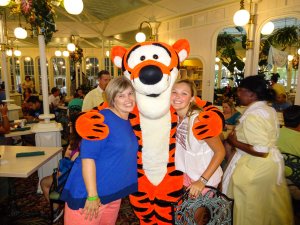 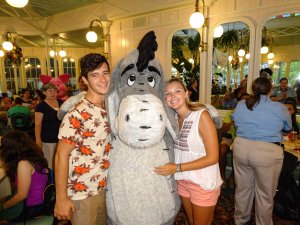 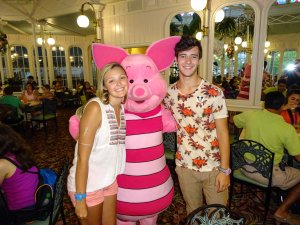 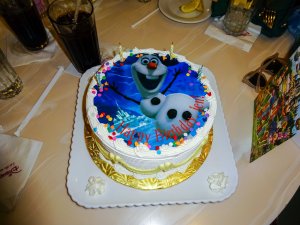 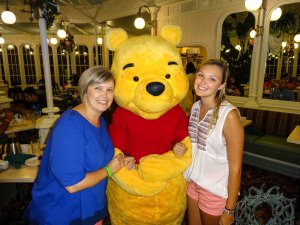 One thought on “Character Meal Fun at Disney”