Getting back to the main topic of the blog, I figured I’d do a few posts on our favorite ports to date. Starting things off at #5 is Grand Cayman, specifically on our Thanksgiving cruise in 2012 on the Carnival Legend, which was the second time we’d stopped here. I have to admit, one aspect of this stop would have kept it out of my top 5 if it were solely up to me, and that’s the dock area itself. I’m not a huge fan of tender ports, but I get that they’re a necessary evil. What makes this one particularly annoying for me is how small and crowded the dock area is, which is really my only complaint about this port. Outside of the dock area, the area around the port is clean and the locals have always been friendly to us.

On this visit, my wife had booked us on a non-cruise line excursion directly through Tours Cayman. The specific tour we were booked on was a combo tour of the turtle farm, followed by a trip out to Stingray City. We’d also done the stingray swim on our last visit to Grand Cayman in 2006, but that one was a cruise-sponsored excursion that was pretty well crowded. This time around, we were with a much smaller group, and with only two ships in port, had a much better experience.

Cayman Turtle Farm: The facility was larger than we expected, and offered interaction with and viewing of a variety of turtles. The turtle interaction areas were interesting, and my daughter definitely enjoyed being able to handle the small turtles. They do have rules around handling them, with the primary one being that you should always hold the turtles over the water, not over the concrete. There were usually one or two staff members around to remind people of that, but occasionally you’d see kids (and sometimes adults) breaking that rule for the sake of a picture or two. Seriously people, it’s a pretty easy rule to follow. Outside of the turtles, there’s a variety of other sea life to see, as their site shows. In addition to all of that, they have a lagoon-style area that you can snorkel in. They’ll let you check out snorkel hear, sans fins, to go out and explore the lagoon. I’m glad we didn’t have to pay for the gear, because it wouldn’t have been worth it for me as there really wasn’t much to see, and not having fins made it a very long swim around the entire lagoon. The kids I encountered along the way seemed to be having a blast, though. All in all a good stop on our tour. 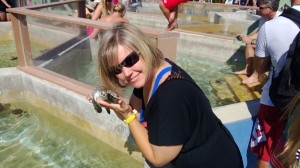 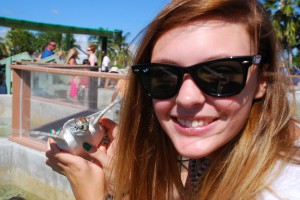 Stingray City: Again, this is one we’d done on a previous stop, but this experience was much, much better. We were on a charter boat carrying ~20 people plus a couple of outstanding guides. When we arrived at the sandbar, we all got into our snorkel hear and hopped in the water, and got plenty of time to swim around with the stingrays. Our guides were very active in the water as well, ensuring that anyone who wanted to be close up to the rays got that chance. They were also taking pictures with their own waterproof gear, which I was thankful for. Yes, it cost us a little (not sure of the exact price, but it was very reasonable, if I recall). I had my GoPro with me to get some video and pics of the rays, but shortly after getting in, I realized the case was filling up with water. Turns out, the seal had failed. I’d used it fine a day or so before, so not sure what happened this time around. Basically left me with a cheap point and shoot in an AquaPac, so we definitely bought the pics the guides took of us. 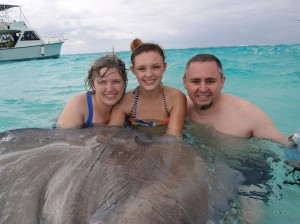 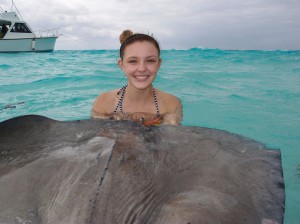 After the tour ended, they took us back to the dock and dropped us off, and we walked around the shops for a bit before heading back to the ship. Not being a fan of long lines, we went back and hour early, as tender lines can get pretty long the closer you get to departure time. All in all we had a good day, and wouldn’t hesitate to book a tour with Tours Cayman again, they were great all day long!