As mentioned, the Florida trip I’ve been writing about wasn’t for pleasure, we were down there in training for our CruiseOne franchise. I’ll cover that more in my next post, but back to the trip, the week ended with a tour of the Norwegian Getaway. We’d never done a ship tour like this before, so we weren’t sure what to expect, but I have to say that we really enjoyed it.

First, a ship tour gives you the high of getting on a cruise ship and the low of getting off all in the span of about 3 hours. It was surreal standing in the passenger boarding area waiting for our guide to come get us, and I admit to being jealous of all those who were about to get on and get out of town for a week. Here I was, standing there dressed in business casual, watching a whole bunch of people walking by in shorts and sandals. Made me want to book something right then and there.

Once our guide arrived and all of our people made it through security, we headed for the gangway. We were boarding shortly after the previous guests had disembarked, and right before new passengers started getting on board. With this in mind, they hustled us up pretty fast to The Haven, one of the areas I was interested in the most.  We needed to get through the show cabins and off those floors fast, as those guests board first, and they obviously don’t want us trapsing through guest rooms as those guests are arriving. Now, my interest in seeing this area is because I’m somewhat skeptical of the “ship within a ship” concept that The Haven presents, especially as more lines move to similar models. I can see the pluses (no chair hogs, a quieter pool area) but I’m also not really the kind of guest that this model fits. I like being out and active and participating in the on board activities, so I’m not really sure I’d spend much time in this area, outside of when we’re in our room. I could very well be making poor assumptions about The Haven, so maybe it’s something you have to experience first hand. In any case, I admit to being impressed with the rooms we saw. The one thing that really intrigued me were the forward balconies, which provide an awesome view. It would seem you’d potentially get a ton of wind out there on some days, making the balcony less useful, but that’s only based on my experience on the forward outside areas on some Carnival ships. If anyone’s stayed in one of NCLs forward balconies and can comment, feel free to add your input. Anyway, here are a few shots from the rooms we saw on the Haven floors: 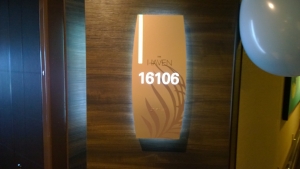 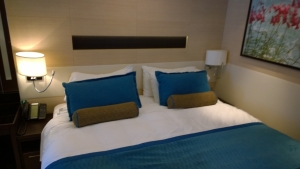 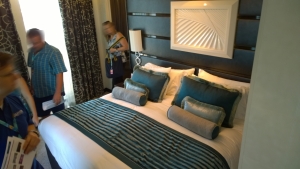 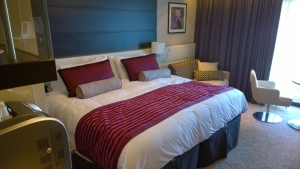 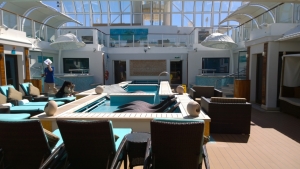 Moving on, after we finished in The Haven, we moved on to touring regular cabins. For the most part, they were pretty standard fare, with the exception of the spa cabins. Interesting location for the tub 🙂

Another set of cabins that stood out were the solo cabins, in an area aptly named the Studio. Solo cabins are somewhat rare on contemporary lines, so offering up a cabin where single cruisers only pay a single rate is a plus. Yes, the cabin’s noticeably smaller, but still, you’re not paying up to 200% of a single fare to cruise alone. The Studio also comes with access to a private lounge area, and frankly, the decor of the area is pretty well done, imo. I managed to get a shot of one of the rooms while we were in there:

After we finished our cabin tour, it was time for lunch. The Getaway has plenty of food options, and the one set up for our group that day was Taste. I think I’ve mentioned this before, but we’ve only been on NCL one other time, and were far from impressed with the MDR food. We were part of a large group on that sailing, and no one in the group liked it, especially the foodie. The specialty restaurants were good on that trip, but having to pay for decent food left a bad taste in our mouth (pun intended 😉 ). This was the other part of the tour I was really interested in, as I wanted to see first-hand just how much the food has changed. In short: I was pleasantly surprised. We had a full menu, 3 courses. I had the chicken nachos as my appetizer, meatball sub as my meal, and the peanut butter cup cheesecake for dessert. All delicious, except the fries. They were okay, but tasted like they’d been grabbed off the pool grill.

After lunch, we had an hour left to tour the ship on our own, all while guests who had boarded were also walking around, which gave us a sense of how crowded a ship this size might be. Things we found:

Here are a few more pics from our tour. Sorry some of these are blurry, we were constantly on the move, and I was doing my best not to get in the way of any their actual guests. 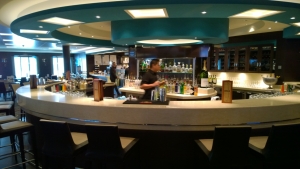 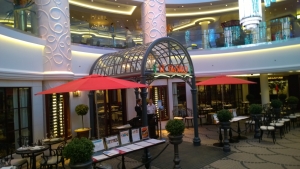 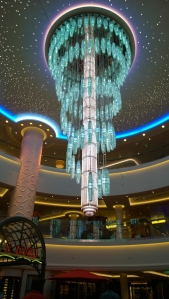 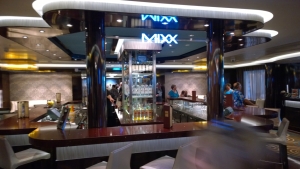 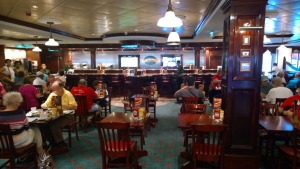 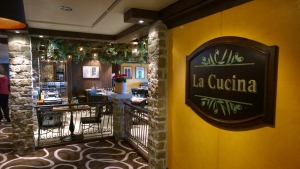 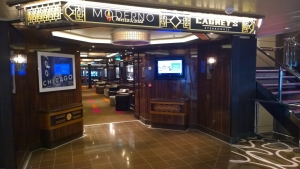 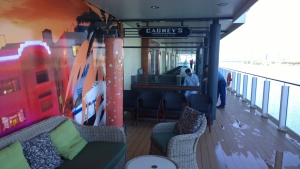 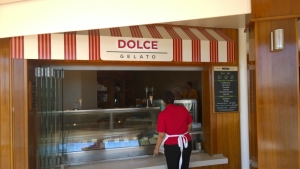 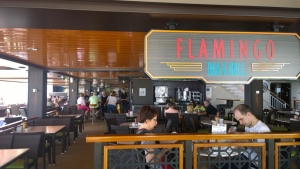 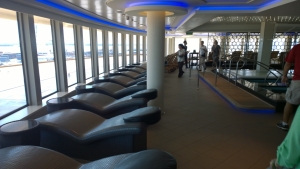 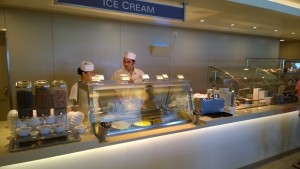 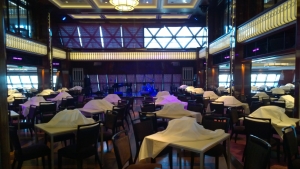