Earlier today I cashed in one of the presents I got for Christmas: a Living Social deal for a 3-lap driving experience from the folks at Motorsport Lab. While it’s not travel, I figured I’d throw out a quick review on it. Note that my review is for the Charlotte event, I can’t speak for any other location.

When you register on Motorsport Lab’s web site, you get to choose the type of car you want to drive. For this event, there were 3 options when I registered in late December:

Being a life-long Lambo fan, I chose the Gallardo. After you register, you’re sent a link to the participation form you need to fill out and bring with you to the event. As I saw called out in the many Yelp reviews of this company, this is a rather long form (16 pages), filled with all kinds of scary language warning about possible charges for things like damage and exceeding various RPM levels among other things. They offer insurance for each possible problem at the charge of $20/$30/$50 per waiver, depending on the item. That, and the form calls out suggested tip levels very clearly, which I admit is something I find a bit tacky. I’m fine letting people know the instructors work off of tips, but suggesting amounts like that can be a bit of a turnoff. After reading a few of the Yelp reviews, I see I’m not alone in that. I also saw a number of people mention that the added insurance wasn’t needed for most locations, so when I filled it out, I declined all of them. I’m glad I did.

Several of the reviews I read were negative, with some people even saying they skipped the experience entirely after being scared off by the language in the form. This is completely unnecessary in my opinion. Even if you don’t believe me, go early and watch a few people run the course before you sign in so you can get an idea of exactly what is going on, you might be surprised. With all the negative reviews, I figured it was only fair to throw in a positive review since we enjoyed the event.

First, did I spend any money beyond the cost of the Living Social deal? Yes. Totally by my own choice and it was worth it. I asked about getting a ride along for Bayley, who is home for spring break, and took him up on the offer to get her laps with the instructor for $50. That fee and the tip were the only added costs for us. They weren’t being pushy with anything, and were up front in saying that people should tip what they were comfortable with. When I checked in, the guy at the table looked over my forms, saw I’d declined all optional insurance, and moved on without trying to change my mind. I even heard him tell the guy in front of me that most of it wasn’t needed for a course like this. Don’t be scared or turned off by all the language in there around damage, I assume most of it is to ensure that people thinking they’re going to treat these things like rental cars are talked down off that ledge. There were a few other complaints in other reviews that could have been addressed by people doing a little research beforehand, so I’ll call a couple of them out here:

(Note: If you want to read those reviews, just search for the company. I’m not a big fan of Yelp so I’m not linking to them)

Back to the review: After checking in, we hung out under the canopies they’d put up (due to rain) and waited for the event to start. There weren’t a huge number of people for our 9am session, I’d say 7-8 for each of the two cars at most. Those driving the Ferrari got a nice upgrade at no cost, as the 360 was in the shop, so all they had was the F430 (both the F430 and Gallardo are 2006 models, BTW). They take you out based on the time you checked in, which they’d written on your wristband, so I was 3rd for the Lambo. With the ground being so wet none of us in that first three pushed all that hard, but I really did enjoy it. I’ve driven some fast stuff, but never something so well balanced in the corners. The instructor (or ‘sherpa’, as they call it) who was with me was really good, too. Very nice and talked you through the whole thing, and was far more helpful than the spotter I had with the IndyCar experience. He gave me pointers on corner entry/exit, and when to give it power exiting a turn. It ended faster than i’d have liked, which wasn’t a big surprise. Three laps is a bit short in my opinion, but I knew what I was getting in to, and I’m sure if I’d asked I could have upgraded to six for a little more. It was enough to give me a taste of what a well balanced supercar felt like, so it was worth it to me.

After I went, my daughter was up for her ride-along. When I bought it, the guy said that the cost is $50/lap, but they normally go ahead and do two laps for that. She actually got three, and he seemed to really be enjoying himself behind the wheel out there (who wouldn’t?), intentionally kicking out the rear in a few corners. Just for fun I gave him a heads-up that he had her past experiences to live up to, as she’s done an IndyCar 2-seater ride as well as the Audi ride-along at Daytona. He definitely pushed it, and she loved every second of it. I’ve got video of her laps up on YouTube if anyone wants to see it.

When it was all over, we both agreed that we had a blast. All of the employees were very friendly, and the car was a blast to drive, even in the rain. For the Living Social price it was definitely a fun morning, but I wouldn’t have done it for the listed price of $549. Not really sure if anyone actually paid that this morning, though. I do think Jen made a bit of a tactical error in buying this for me, as now I want to move up to one of the events on real tracks, like this one. There are a couple of cars on their list I’d absolutely love to get behind the wheel of, like the McLaren, so I’ll be keeping an eye out for deals with them, too 🙂 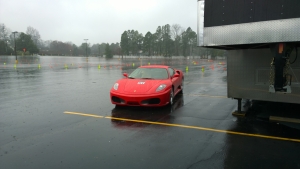 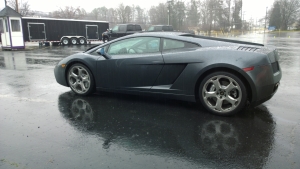 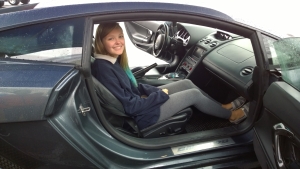 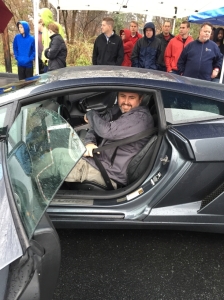