A Night in the Kirkenes Snow Hotel – Part 1

As mentioned in my Norway kickoff post, our first real stop on this adventure was in Kirkenes for some dog sledding and a night at the Snowhotel. We’d gone back and forth on the latter part, as it’s not cheap to stay there, but in the end decided that it was a once in a lifetime that we just had to do while we were there. We couldn’t have been happier with that decision :).

After flying up to Kirkenes from Oslo, we grabbed a cab from the airport to the hotel at a cost of around 250NOK. On arrival to the Snowhotel, we checked in to the main building, dropped our luggage, and were given a quick tour of the place by one of the hostesses. She did a really solid job of explaining how everything was going to work, walked us over to the actual snow hotel building, pointed out the heated cabins for those who don’t want to sleep in an ice cave, gave us a quick tour of the main area where dinner would be served, and where the private lounge for snow hotel guests was. Some shots from the walk: 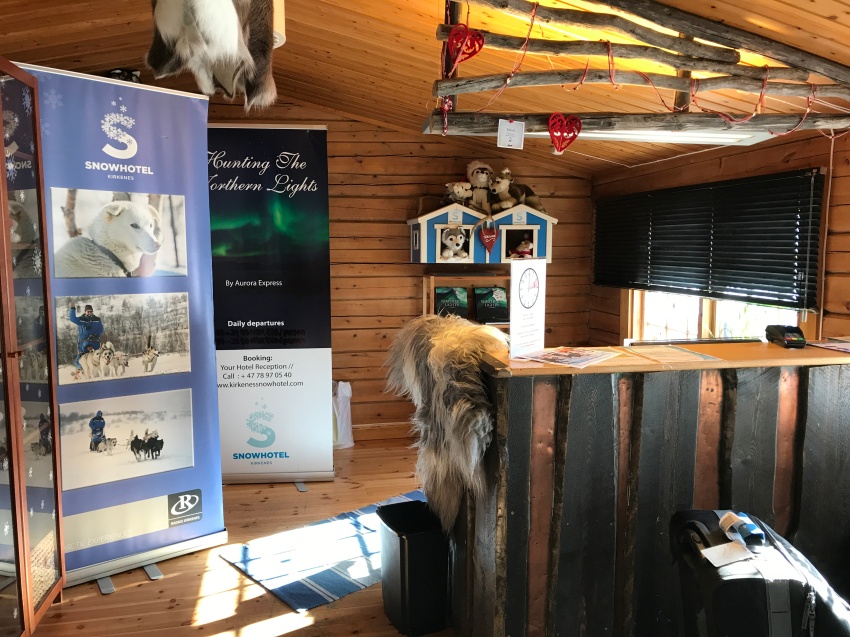 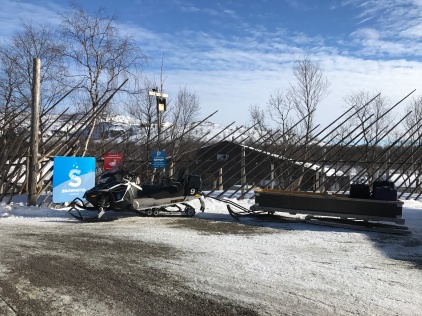 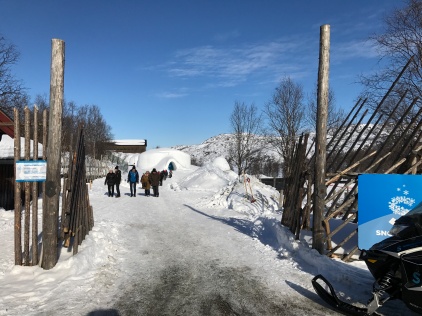 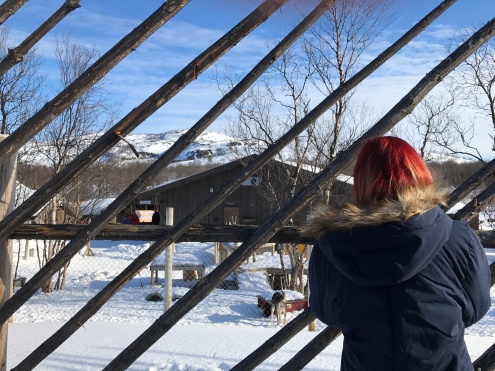 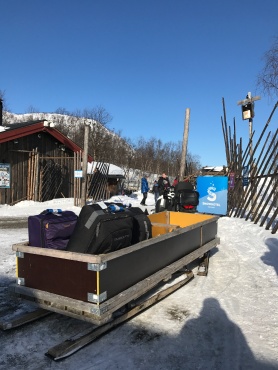 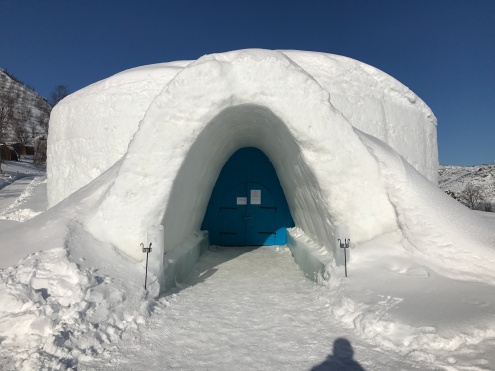 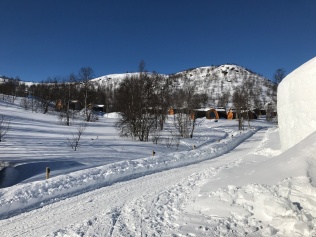 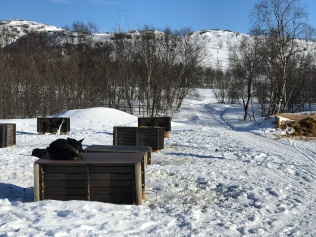 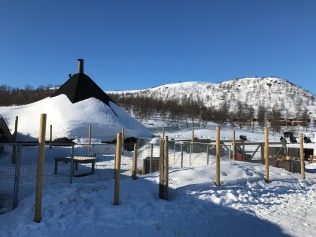 We were also told that we were the only ones staying in a family-sized room, and as a result we’d have our choice of rooms in that category, so we should check them all out and let them know which we wanted. After walking through each of the family rooms, Bayley easily made the call, we were staying in the Frozen-themed room, which you can take a 360-degree tour of!

The artists who carve these rooms do amazing work, even down to a thinner ceiling to allow natural light in, visible in the above photo.

With that out of the way, we had some time before our dog sledding excursion began, so we walked over to the Gabba Restaurant to grab a quick bite to eat, as we hadn’t had lunch yet. Just grabbing a snack, I had a reindeer sausage, Jen had a salmon sandwich, and Bayley had a piece of cake. Not exactly a full meal, but enough to tide us over for the dog sledding, and delicious to boot!

When it came time for the excursion, we stepped out of Gabba to find the group already assembling. The dogs are all onsite, so we basically were leaving on the sleds from just a few feet outside of the restaurant. The guides were busy getting the dogs all sorted out, so after putting on the insulated overalls and balaclavas they provide, we headed over and waited by our assigned sleds. Jen and Bayley were in the lead, with me in the second one. After getting everything sorted and meeting our guides, we were off, sort of. Jen and Bayley’s dogs weren’t too keen on working with each other, so we did have a couple of early stops shortly after leaving to get that sorted, but they got it taken care of pretty quick. 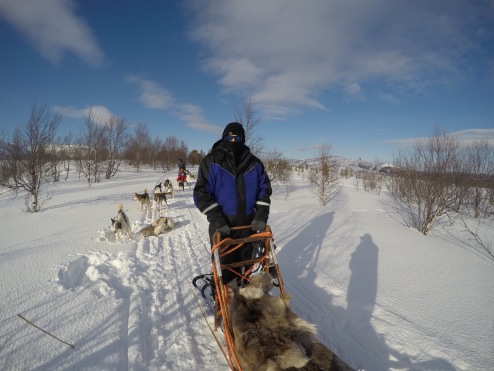 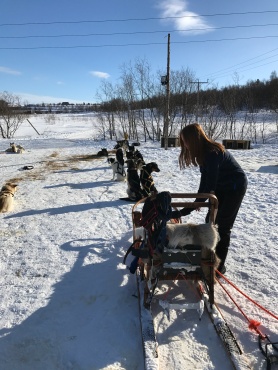 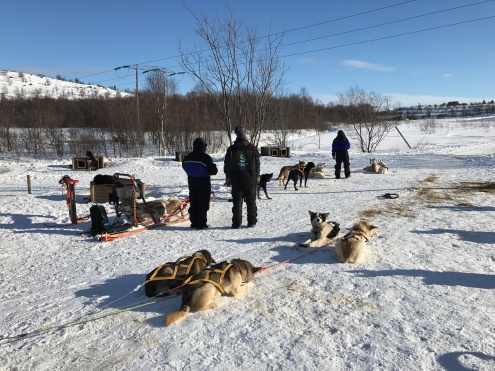 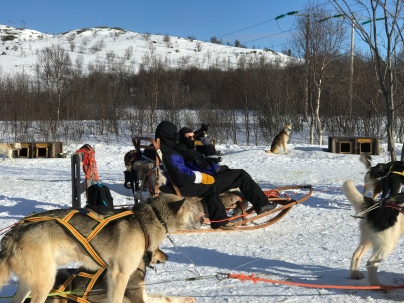 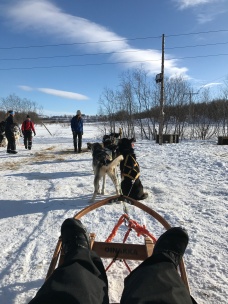 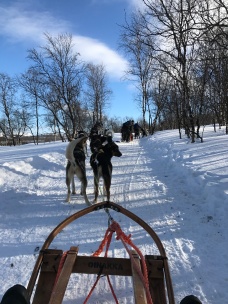 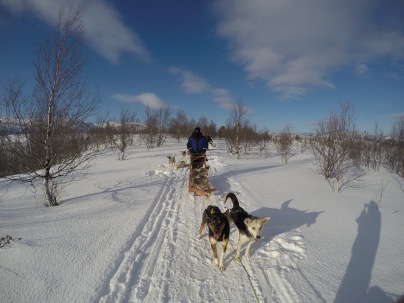 I have to say, this is one of the most fun things I’ve ever done, and gave us some amazing views of the snow-covered landscape. Just check out some of this video!

At one point, we had the option to drive the sled (as shown in one of the pics above), and I jumped at it. I actually got to drive for two stints, since I was the only passenger on mine, and had a blast the entire time. I even managed to keep the sled upright :). Shortly after I gave the controls back, however, that changed. Right before the half-way point, we hit a corner faster than expected and took a tumble. I wasn’t expecting the shift in the sled, so I totally forgot to lean against it, which I’m sure didn’t help. Falling out into a bunch of light and fluffy snow meant no injuries, but the dogs were still running, sled in tow. Fortunately, the driver of the sled ahead of us was able to stop our sled as it raced by.

That was about the point where we were stopping for a break anyway, so the guides locked down the sleds, handed out some yummy warm juice, and set up a fire for us to warm up next to for a bit. It also gave us a chance to give the dogs some love, which we were all to happy to do: 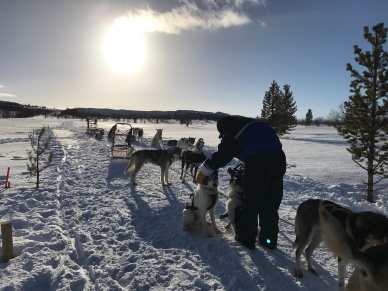 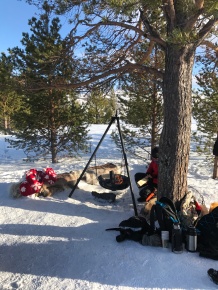 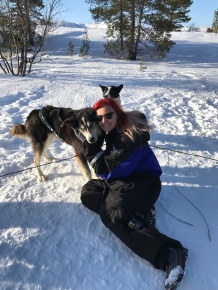 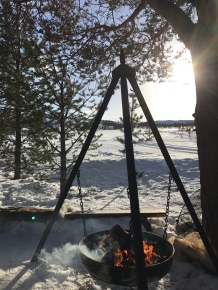 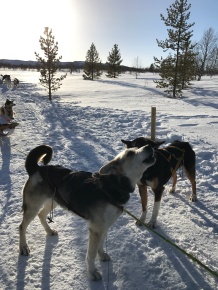 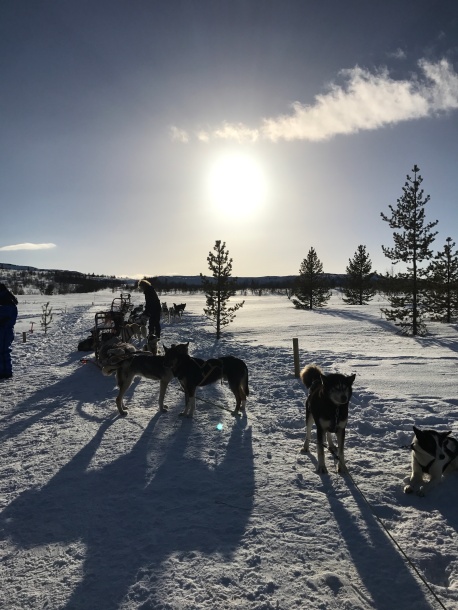 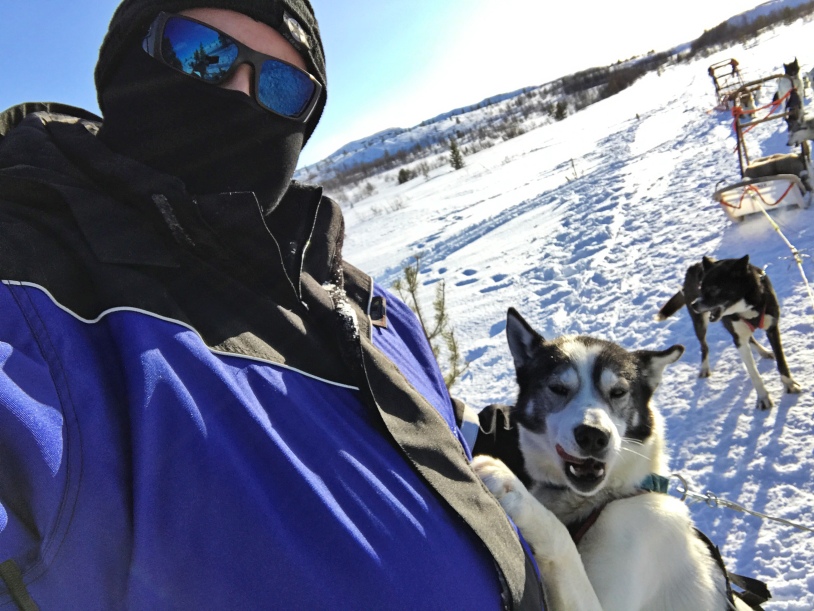 After the stop ended, we continued on through the snowy tundra through the back half of the course, with scenery just as beautiful as the first half. Upon our arrival back at the hotel, all of the dogs who were left behind welcomed us (or their fellow pups) back rather loudly, as well!

After arriving back, we returned our cold weather gear, and went to rest for a bit before our Snowhotel stay really began. The trip was a ton of fun, and we were all really glad we spent the money. I highly recommend trying this if you get the chance!

Next up, I cover our actual stay in the Snowhotel, complete with dinner, drinks at the Ice Bar, and sleeping on a large block of ice!