Picking up where I left off in part 1, after grabbing a golf cart from the suite back to the infield, we immediately headed for the Ferris wheel. One of the best views of the race at night is from that thing, and at that point in the night, it wasn’t busy all, so we got an extra-long ride. To get an idea of the view you get of the infield, here are a few night shots I took, and be sure to check out the video I posted of a full rotation while looking over the infield.

With our midnight Ferris wheel ride over, we decided to rest in the Audi Boardwalk Club for a few minutes before walking the paddock and pits. When we walked in and sat down, there was only one other table of people in there. It took all of 2 minutes for Bayley and I to realize who two of them were; Conor Daly and James Hinchcliffe. Hinch was at the 24 as a co-driver on the #70 SpeedSource Mazda, and as mentioned in the previous post, their race had ended a little earlier with an oil pump failure. We’re both big fans of the Mayor of Hinchtown, so it was cool to walk in to that. I’m not one to bother someone (regardless of who it is) while they’re hanging out and relaxing, so we just sat and rested for a few. At one point, Hinch got up and walked past us, so I went ahead and asked if we could get a pic with him and Bayley, and as usual (he’s one of the most fan-friendly IndyCar drivers), he was happy to oblige:

Shortly after that, somewhere around 1am, the three of us decided to head to the paddock to see if any cars were in for work. Sure enough, there were a few teams hard at work repairing cars, and a couple cars covered due to terminal issues. Walking pit lane, there was plenty of action there too with teams filling up fueling rigs, getting misc parts together, and preparing for pit stops. These shots are another example of how much of a team sport this really is. There’s also one in here taken just before the Paul Miller Racing guys did a driver change, with Christopher Haase standing on the pit wall in full gear waiting for their Audi R8 to make its way to the pits. 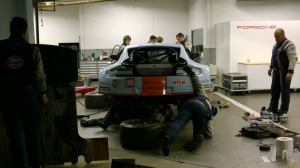 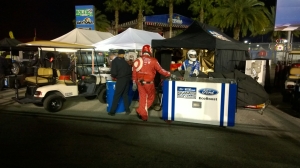 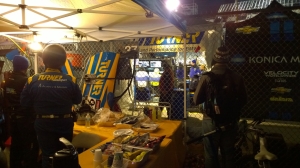 After walking around down there for a bit, the kids decided they wanted to rest for a while, so they headed back to the boardwalk club, while I continued walking around. I’d hardly done any shooting with the Nikon D750 I rented for the trip, so I decided to head over to the infield grandstands to get some shooting in. I forgot to bring my step stool, a very handy tool for getting shots over the fence line at the track, so I used the grandstands in the turns 3, 4 and 7 areas to do some night shooting. While I didn’t shoot nearly as many pictures as a did last time, I did get a few that I like: 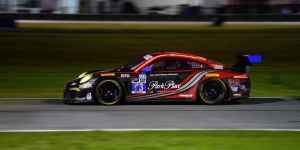 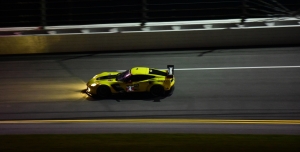 Between walks of those grandstands, I stopped in the Boardwalk Club to check on the kids. They were both pretty tired, but on my stop in there, her friend and I downed some Red Bull to stay awake. They did use the floor in there as a bed for about 10 minutes each, but that was about the extent of the sleeping. I’m pretty sure we were the only ones with the Audi ME tickets who stayed the entire night, as we were the only non-employees in the Boardwalk Club between 2am and 6am. 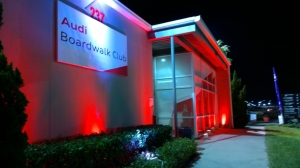 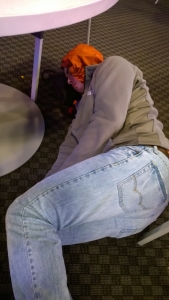 Around 6am, the catering staff began to arrive, and we cleaned up our area a bit so we weren’t in the way. As more people began to show up, the sun started rising over the backstretch. I absolutely love watching the sun come up at the track, and the patio area of the Boardwalk Club was a great place to do so.

After breakfast, we had to head back to the room for a few minutes to check on Bayley’s cat, so we grabbed a golf cart back to the car corral, piled in my daughter’s Jeep, and were on our way. I admit, it was nice to clean up a little at the hotel after being up for more than 24 hours. We only stayed for about 20 minutes, then headed back to the track, where we decided to spend some time relaxing in the suite. If I recall, we were the only ones in there at that point, so the kids hung out inside while I sat in the seats outside for a bit, taking in more of the race.

At about 10:45am, after just over an hour and a half hanging out in the suite, we decided to head to the Boardwalk Club for lunch. One of the things we hadn’t taken advantage of yet were the race updates. Audi did these a couple of times Saturday and once or twice Sunday, and it was basically a short update on the status of the Audi teams from one or more of the drivers. For the 11am update today, Dion von Moltke from Paul Miller Racing was there between stints to update us on their race. They’d had a pretty good race up to the 17 hour mark, fighting for the win, but a couple of issues late in the race had them fighting to get back up front. While Dion was in there talking, we could see on the monitors above him that another issue struck the car, as it was spending an extended period of time in the pits. In the shot below where you can see the monitors above him, the one on the left is the live shot out the rear of his car as it was sitting on pit lane. 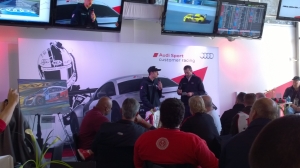 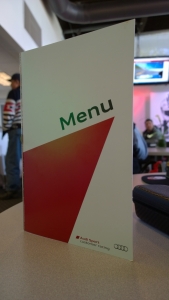 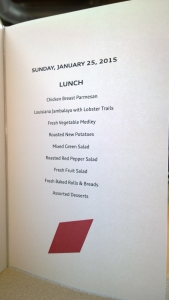 The update was cool, something I wish we’d taken advantage of on Saturday, but live and learn. After Dion finished up, we enjoyed one last meal in the Boardwalk club (off that awesome menu above), and headed back to the suite to end the race. We expected it to be full late in the race, so we wanted to get there as quick as possible to get decent seats, which we managed to do. There were only a few people there at that point, so the kids grabbed some seats along the window inside, and I grabbed a spot outside to enjoy the final couple of hours. It did get pretty busy, as expected, but it was a great place to watch the end of the race. We were all worn out, and walking around really wasn’t an option. Those last 15 minutes made for a good race, as Jordan Taylor, was putting on a show trying to get back up to Scott Dixon, only to have all of that work undone by a miscalculation by the team on his time in the car. When the caution came out for a wreck near the bus stop and Jordan brought the #10 in to the pits, the assumption was they’d miscalculated on fuel, but jaws dropped around me when they did a driver change. The guys over at Jalopnik have a pretty good story on what happened, it’s well worth the read.

With the race over, we headed down to grab a cart from the suite back to the car corral one last time. We hopped in our cars, headed to the hotel to rest, clean up, eat dinner and get a full night’s sleep. Bayley’s friend had never been to a race like this before and seemed to really enjoy himself all weekend, so hopefully we helped bring a new fan in to the sport. Regardless, the entire weekend was a blast. I was really happy with the decision to buy the Audi Motorsport Experience tickets, and can’t say enough good things about the staff, they were great all weekend. We’ve now done this race in two completely different ways, so next time maybe we just need to rent an RV and camp out in the infield all 4 days. One of these years, hopefully :). That last shot below of us on our balcony was taken after the race, just before we cleaned up for dinner. After roughly 36 hours of being awake we were wiped out, but loved every minute of it. Huge thank you to Audi Sport, Paul Miller Racing, and Flying Lizard Motorsports for an awesome weekend! 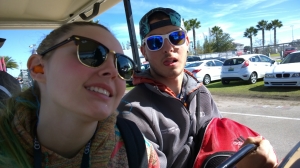 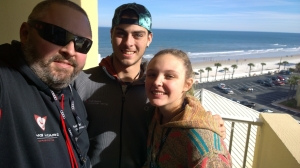